After writing this post a couple weeks ago, and after noticing the absolutely beautiful weather around Sacramento on St. Patrick's day, I thought I'd trek over to the CSU Sacramento area and take a few pictures--you know, because the trees are already turning green :-)

I parked across the American River from the university, in the Campus Commons neighborhood, and took Sacramento's own Golden Gate Bridge (the Guy West Bridge, actually) right-to-left, north-to-south, to get to the university. 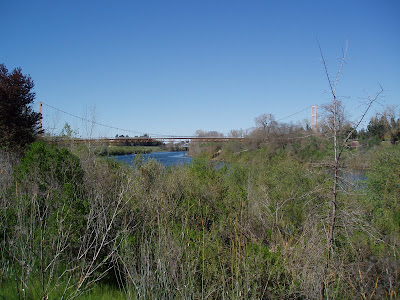 What you see in the picture above is part of the American River Parkway, the barest sliver of what the area was like when John Sutter first settled here. I've read that forests stretched for 5 miles on either side of the river then.

This picture of the bridge is taken from atop the southern levee. The lanes are to keep bicyclists from running into each other. 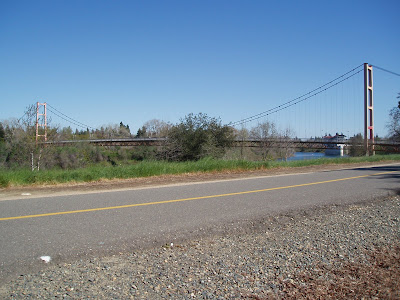 I take it back. It shares nothing in common with the Golden Gate Bridge save for the fact that they're both suspension bridges. 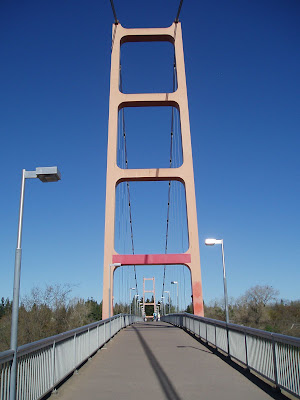 Sac State's mascot is the Hornet. I saw this cousin of the hornet on the north tower of the bridge. If you don't know what I'm talking about, click on the picture to enlarge it. (Mid-flight--how cool is that?)

This view is from the bridge looking west, with the Fair Oaks Avenue bridge in the near distance. On the left you can see the southern levee wall; the northern levee is beyond the trees to the right. 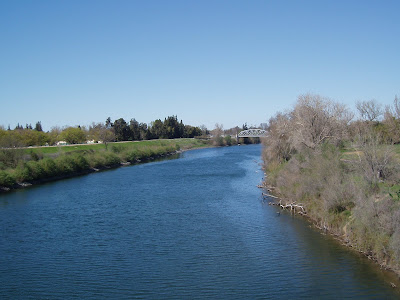 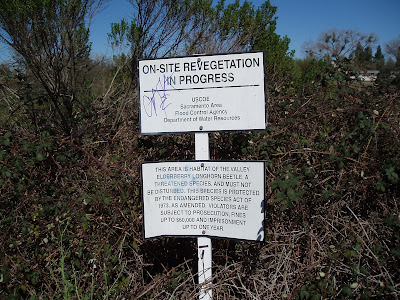 We wouldn't want to harm the elderberry longhorn beetle, now, would we? 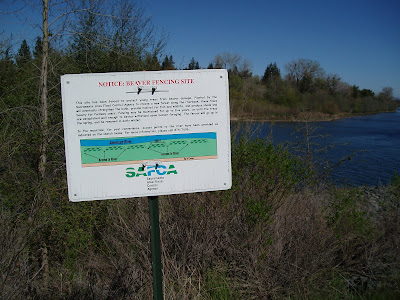 Trying to reforest the river bank, I guess.

I'm not sure what this building is. I've emailed a friend who attended Sac State, maybe he knows. (Update: he says it's a water treatment facility.) 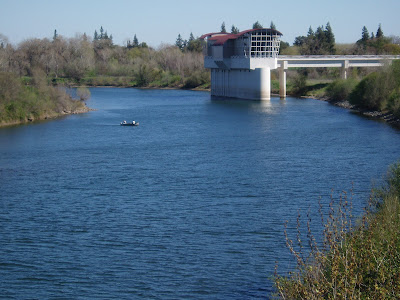 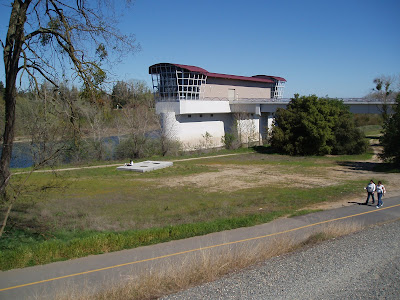 As you can see, some of the trees are still in winter mode and some are already starting to bloom. I wonder what's going on in the quad area below, though--it's usually covered with grass. In fact, that's the quad where Earth Day is held each year. Mother Gaia has been raped! 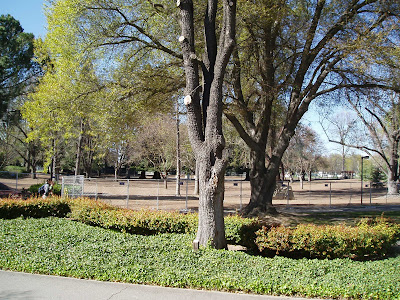 Sac State doesn't "feel" like a university. The buildings are too close together, and there's no real "open" space. It's heavily treed, which I'm sure is nice in the summer, but it gives the campus a "closed in" feel to me.

That doesn't stop me from admiring this building, though. 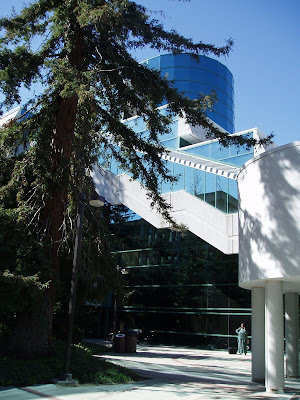 I saw this string of motorcycles over by the University Union (the UU). Apparently, at $3.50/gallon, not everyone needs to drive a car to campus. 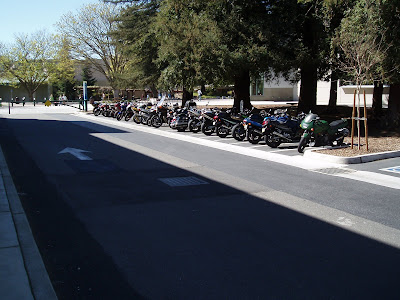 When was the last time you saw a genuine moped? 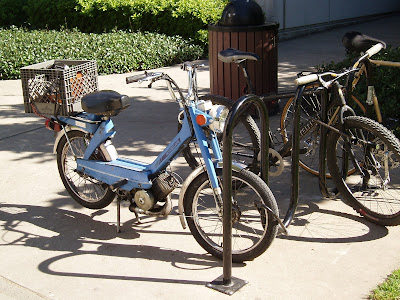 The library quad, viewed from the library. Note the different stages of the trees. 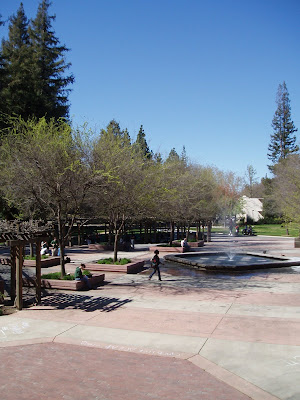 Looking back towards the library and the library quad. Zoom in on the fountain in the center--does it remind anyone else of Shinzon's weapon in Star Trek: Nemesis? 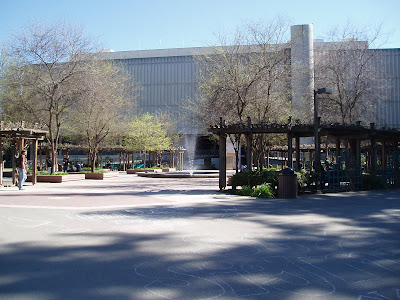 Lots of trees make lots of shade. And don't you love the political statement of the sign? There's a lot of that kind of thing at Sac State, which isn't known for being a right-leaning campus. At all. 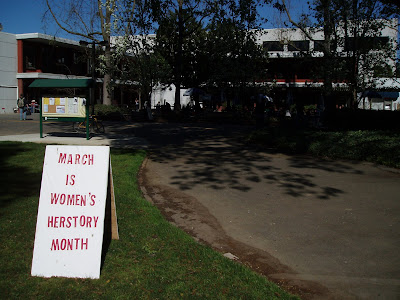 No one's going to invite George Will to speak at Sac State, that's for sure. 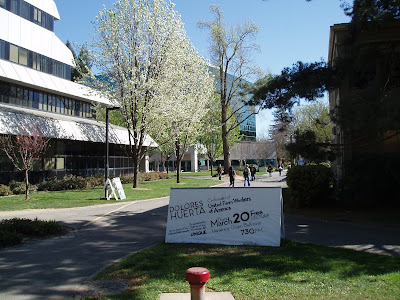 I'm sure that when this marker was placed, the people who placed it thought it was important. 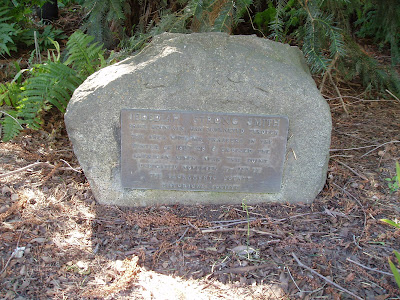 Yet, you can barely see the marker hidden under a tree at the back of campus. 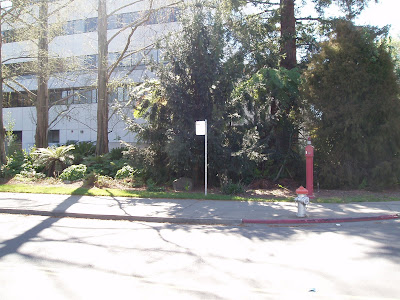 We suffer terrible allergies here in the Sacramento Valley. 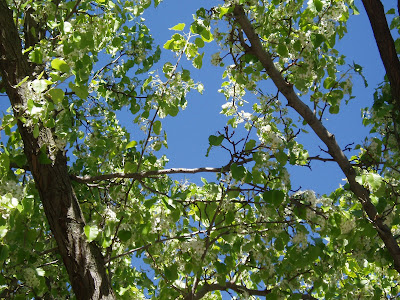 It's the price we pay for being in such a beautiful area. 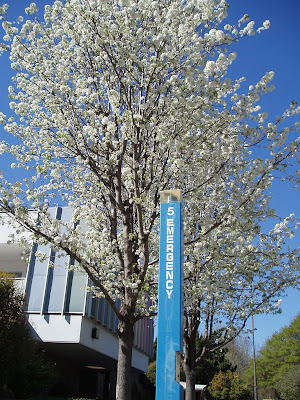 If you're going to have an emergency case of hay fever, though, the spot above is the place to have it.

I don't even know what these thumb-sized orange fruits are. 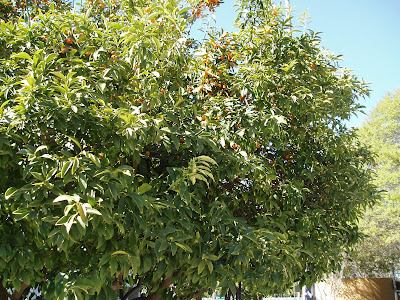 Ah, a poppy. In fact, I believe this particular variety is our state flower. 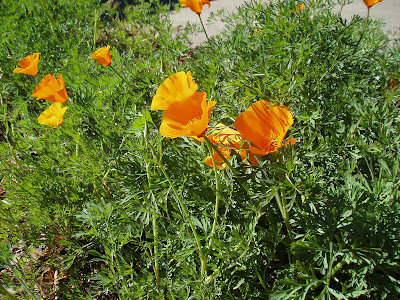 Here's a bit of the Parkway, across the river from campus. You can see the different stages of hibernation of the trees. 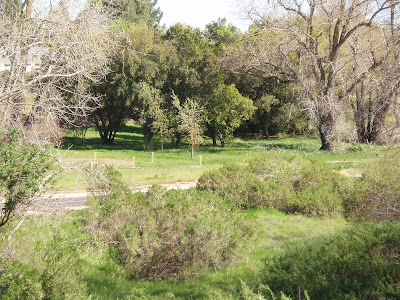 Oranges bigger than your fist. 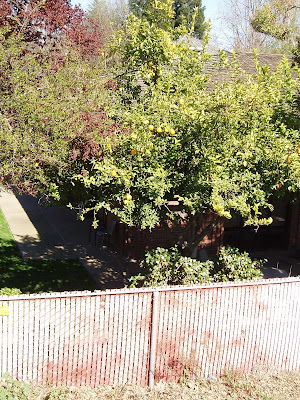 The color of this plant is striking. 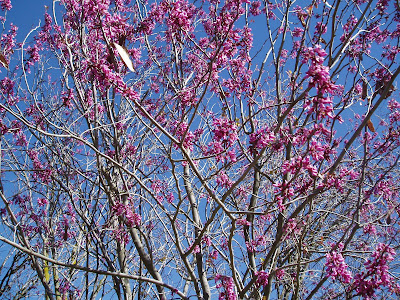 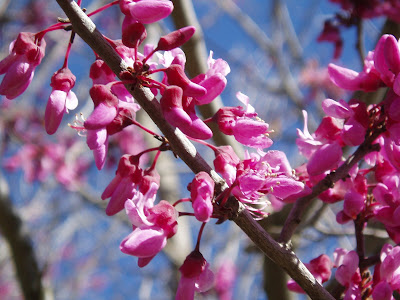 And I'm back at the car. 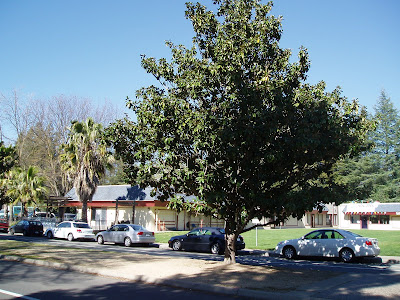 Do magnolias and palm trees belong in the same neighborhood?

Southerners will recognize the magnolia tree in the picture above, but might not recognize the variety shown in the 5th and 6th pictures from this post from last year.
Posted by Darren at 7:30 PM

Were the thumb-sized fruit some kind of quat? We have a loquat tree in our front yard that bears similar looking fruit, but those aren't ripe until early June.

My thought was cumquats, but since I know next to nothing about plants, I don't even know how I came up with that term!

Loquats if they feel like apricots in texture; kumquats if they have a citrusy skin. I'm guessing loquats - used to pick 'em off trees as a kid in Southern California.

Loquat it is, then!

I already loved this blog, but throwing in a Star Trek reference...especially a solid reference (to a movie only trekkies saw), has now made this one of my initial stops during my day.

What more could I ask for?!

20 Quatloos on the newcomer!

Come to the South Carolina Low Country where magnolias and palm trees have coexisted forever ;)

I work for the organization that brings speakers (such as Dolores Huerta) and concert performances to Sac State.

want us to being George Will? (whoever he is...and i feel too lazy to do research)

i work for sac state and was looking for info on earth day this year and in a google search, your blog came up... so i thought i'd pass along that it's NOT being held on campus this year, just fyi. and i'm a photographer and enjoyed your images =)

No Earth Day this year? I'm sure there'll be one in Davis.

Do you know why Sac State isn't hosting one this year?

And thanks for the compliments about the pictures. I'm not very artistic, but I'm trying--at least as far as framing pictures goes.