A week and a half ago a childhood friend and I made our annual trek to Reno. As is usual for me, I came back broke and my friend came back money ahead. How he can pick the right slot machines, I'll never know. Buildings like those in the picture below, though, aren't built because people like me keep winning. 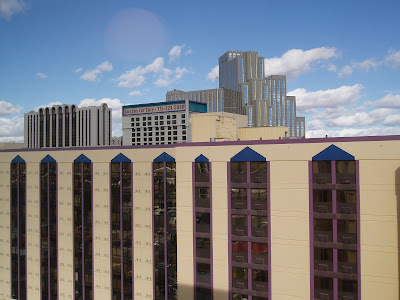 Anyway, he had some friends performing in The Music Man over in Virginia City, about a half an hour away, so we went to see the show. Virginia City is the site of the Comstock Lode, and in its heyday was a large city complete with an opera house--Piper's Opera House. It was in what is left of Piper's that we saw The Music Man.

You can see from the picture in the link above that the opera house appears built into the side of a hill; as a result, the stage and seating area are upstairs. The pictures are dark, but perhaps they're enough to jumpstart your imagination about what it must have been like in, say, the 1890's. 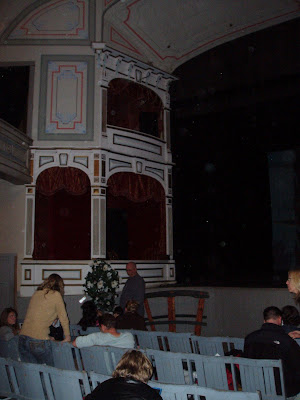 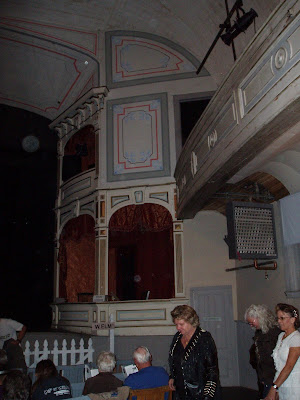 These first two pictures show alcoves on the left and right sides of the stage. They were used as part of the stage for the show we saw, but I wonder what role they played in the heyday. Might these have been the box seats? Best seats in the house! 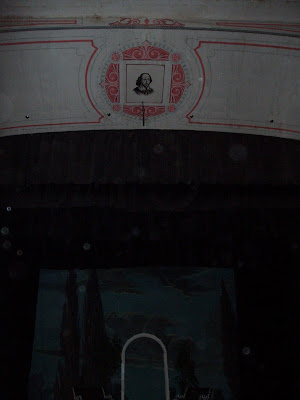 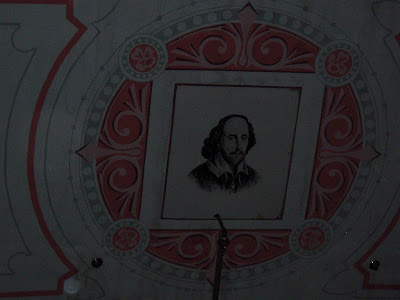 These next two pictures show the picture of William Shakespeare that's painted above the stage. 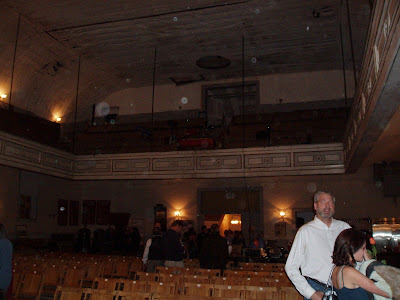 This picture is looking towards the back of the opera house (theater). The balcony area is clearly visible. 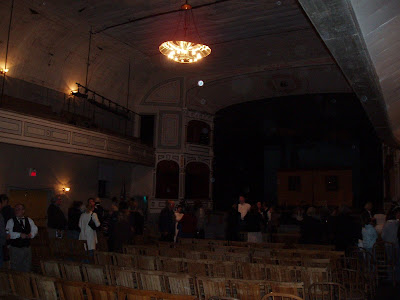 Looking towards the front left of the hall, this is an unremarkable picture except for the lamp hanging from the ceiling. Zoom in and look closely enough and you can see that the fittings were clearly for gas. Also note the mirrored cover to reflect the light into the hall. 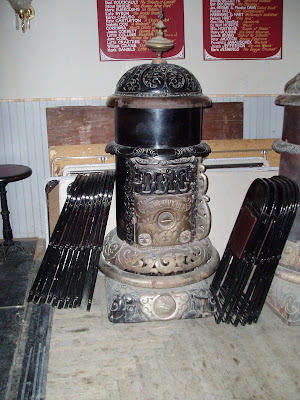 This wood stove stood in a corner at the rear. Virginia City, despite being in the desert, gets cold--at 6200' above sea level the city sees snow, and this heater would have been a welcome accompaniment to a visit to the opera under such circumstances.

We left Reno the next day, my pockets (and spirit) poorer for the experience but still having had a great time. Two pictures screamed to be taken. 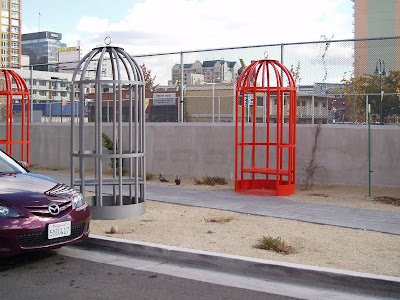 And these are what, exactly? Large birdcages? Perhaps a venue for outdoor go-go dancing? Well, the cages aren't what's funny here. Zoom in and see that the pigeons on the ground to the left of the red cage are fake. Why the heck would anyone want fake pigeon statuary? 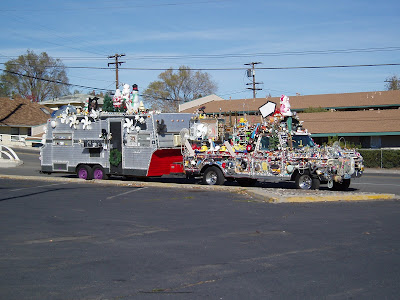 This picture needs no commentary.


More pictures of Reno (and Carson City, the capital) can be seen in this post from early last spring.
Posted by Darren at 7:20 PM

Glad you enjoyed your visit and thank you for your contribution to my salary, I should be getting a raise this year, sometime. Our public art is varied and ...yeah I have no idea what model pigeons are for. Art cars are common, my favorite party in the desert seems to breed them.
Piper's on the other hand is very cool, when I first moved here I fell in with a bunch that would given their time and money to help restore it and the Elk's lodge next door, I have spent many hours up there and your post is real feel good about what they did, I have sent the url to a bunch of the others I know.

Thanks
Piper
aka Scott Hudson

re: the cages and the phony pigeons

Windsor (Ontario, Canada) was littered, river-side parks and sidewalks, with "art" cars some time back.

I couldn't find any links although I'm sure they're out there somewhere in cyberspace.

A whole slew of fiberglass coffee table-sized car-looking objects that were done up in a bunch of fanciful paint schemes.

Virginia City! Now, the Bonanza theme is running through my head.

Did you know that in one (the pilot?) episode, the Cartwrights actually sang words to the the Bonanza theme? I'm sure everyone listening was pained enough that they never tried *that* stunt again! The music by itself if good enough!

No, I didn't know that. Scary.

We watched Bonanza every week. Grew up on it. The Big Valley. Gunsmoke. What has happened to westerns? Where did they go?