Propagandizing In The Classroom 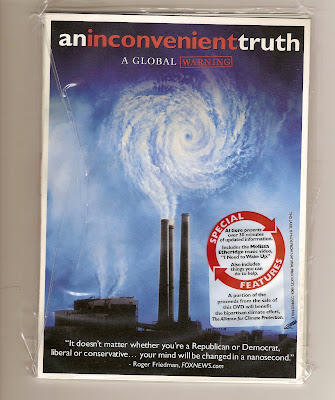 Several weeks ago a friend emailed me a URL and offered a suggestion. I took his advice, and can now write this post. I've wanted to write about it before now (see opening paragraph), but thought that word of my treachery would get out and my plans foiled. Today I learned that that didn't happen.

What's with the movie shown above? Well, that's the topic of this post.

The URL my friend sent directed me to a web site from which educators could get a free copy of An Inconvenient Truth. They're giving away 50,000 copies, for free, just to teachers. Why would they do this?

Of course we all know the answer. Wasn't it Hitler who said, "If you have the children, you have the future"? They're giving these dvd's away to teachers so that we can propagandize in the classroom. The Great Global Warming Swindle can be downloaded at no cost and/or watched on YouTube--will any of the 50,000 teachers that show An Inconvenient Truth also show the BBC show? Probably not, and Gore and the boys know it. I posted recently about a teacher who said he'd distribute some alternate viewpoints to his students; I've checked, and students say he gave them a handout with no discussion at all. Most didn't read it. This was after they had watched the entire An Inconvenient Truth movie, of course.

What's missing here? Debate. Inquiry. Critical thinking. All those things we say we want to develop in our students, until our students start believing things we don't want them to believe--then we need to serve up the propaganda and brainwash, and question the intelligence and morality of anyone whe dares to disagree with the party line.

So I ordered my copy, and received it today. Thoughtfully noted on the envelope was this statement: "This donation was made possible by Participant Productions, StopGlobalWarming.org and private donors." How nice.

I'm not one for stifling debate. I truly believe that the antidote to free speech you don't like is more free speech, not eliminating the opinion you don't like. If your views have merit, they'll get traction. When you try to stifle others--"the debate on global warming is closed", "the science is conclusive", "everyone agrees"--it's entirely possible you're admitting to the weakness of your own position.

However, these people are cynically trying to use teachers to spread their global warming Gospel, hoping we'll proselytize in our classrooms. They want us to scare our students into believing their message, knowing that alternate views will not be presented. They want to close off debate. So I'll join them.

But with a twist.

I'll be cynical, too. I ordered my copy of their movie, and it sits here on my desk as I type this post. I'm going to put this dvd, still in its plastic wrap, in my safe here at home, where it will remain for 20 years. Twenty years from now (I'll be on the verge of retirement) I'll pull this movie out and see who was right--Al Gore, or me. Maybe then I'll show it in class, and we'll talk about hysteria, about certainty in science, about doom and gloom scenarios, about honesty and cynicism. Maybe then we'll be able to have the debate, inquiry, and critical thinking that are apparently lacking where this subject is concerned. Until then, that's one teacher and hundreds upon hundreds of students (per year) who will not sit through this particular message from the one they call the Goracle.

Be sure to check in with me again on March 26, 2027. That's the day I'll take the plastic off the dvd, search for an antique dvd player, and watch the movie. Not a day before.

TEN NETWORK's programmers are baffled. With so much attention on climate change and consumer research indicating viewers were keenly interested in a 2½ hour feast of practical advice on how they might save the planet, Ten's ratings for the Cool Aid blockbuster on Sunday night were still a disaster...

"We had study guides in schools, we had the full support of the print media, both editorially and with advertising, and an extensive [Ten Network] on-air campaign with a number of different creative treatments and different stances." (emphasis mine--Darren)

Update #2, 3/28/07: Here's another "science was in, there was widespread consensus and the conclusion was no longer debatable" story, via NewsAlert. How do we know the leftie was wrong? He was nuts in the 60's and was predicting catastrophe by the 80's. I lived through the 80's. The only catastrophe then was day-glo colors.

Isn’t it interesting how the same people who think “dissent is the highest form of patriotism” when it comes to the war think that dissent when it comes to global warming is evil and troglodytic?

I wish I could muster up enough moxie to care. But frankly after today,I am seriously questioning whether I will be a teacher next year. Between the parents and the administration and the politics, I am frankly just too worn out to care. It's on my blog if you want to read it. Just another straw.....

Darren,
To make up, I've decided to buy it and show in my class. :)

you should send me the link so i can get one of those free copies so I can keep it out of the hands of a teacher who would actually show it and teach it as truth!

That's a good plan. I'd like to have a copy of some of the pieces from the 70's predicting dire global consequences that didn't occur. I think I’ll copy your idea, then at least the world will have 2 copies available.

Isn't it convenient that by making predictions of disasters approaching 50 to 100 years out you pretty much guarantee that A) you either won't be around to answer to it if it doesn't happen, or B) the populous with their notoriously short attention span will have moved on to something else anyway.

Refusing to watch the movie now makes you sound close-minded. No, I haven't seen it yet, either, but this isn't one of my personal mini-obsessions.

But I keep getting in discussions with people about the presidential candidates and am constantly amazed at all the Obama love. I recently read an article stating that Obama's autobiography "is primarily about his rejection of his supportive white maternal extended family in favor of his unknown black paternal extended family."

I find that interesting - in an appalling sort of way - but I'm not going to take this author's word for it. I have the book on reserve from the library (I'm not going to buy it!) and will read it myself. And then I'll have done something that 90% of the Obama-supporters I keep hearing from haven't done.

Watch the damn movie, Darren. Make yourself better informed, not less informed, than the people who take Gore's word for it without watching the movie or reading anything that disputes its conclusions.

I got my copy, too, for precisely the same reasons as you. I may bring it out sooner, though.

An an English teacher, I'm thinking of exploring such concepts as propaganda, hyperbole, and polemic with my students. Then perhaps we'll have a discussion about learning to critically evaluate "expert" sources on a range of topics. I might ask them to research some science "certainties" from our past which have been proven wrong, and evaluate the ways in which experts who have since been proven wrong were presented at the time. I may even ask them to research how the opposition was portrayed in such cases. Then, when we've got all this under our belts, perhaps I'll bring out Al Gore's film…

I don't need to watch this movie. I've read what others have had to say about it, I've read about scientists who contradict the movie have to say, I have my own judgements about the credibility of Al Gore on this topic--I don't need to see the movie. Neither do I need to be in a gulag to understand Solzhenytsin.

I guess all the wooly mammoths are much happier now that Siberia is a frozen wasteland instead of a having the warm summers and mild winters of its past. Oops, we can't ask any of them because they are all dead. I guess I am confused now, if global warming is so bad and cold is good, why are so many species that flourished in Siberia when it had a long growing season with warm soil and rapid spring growth now extinct since Siberia no longer suffers from the evil global warming of the past? Can one of you global warming propagandists please explain?

I'm another teacher who won't be showing it either...however, we did have a discussion on global warming which moved into a discussion of 'd you believe everything you read or hear?" and "you need to consider the source." I also showed them some copies of some newspapers from the 1970's that predicted the new ice age. My kids found that fascinating...

“Refusing to watch the movie now makes you sound close-minded. No, I haven't seen it yet, either, but this isn't one of my personal mini-obsessions.”

I don’t think this is a mini-obsession when a group of leftist hypocrites are trying to indoctrinate children. And yes, I use that word specifically. Fifty thousand copies. Average that to one-thousand a state and you know one copy in a school can be used by more than one teacher.

“Watch the damn movie, Darren. Make yourself better informed, not less informed, than the people who take Gore's word for it without watching the movie or reading anything that disputes its conclusions.”

Point taken. A few years ago I was in a debate over a piece of shit, err fiction, err movie called Fahrenheit 911. I saw the movie in a theater, but I refused to pay that lying bastard anything. I bought a ticket to Garfield; Bill Murray can have my money. To paraphrase something said about the Warren Report, “the only way to believe it is to not see it”

I certainly wouldn't PAY to watch a politicians movie on anything about science but I thought I'd try for the freebie:

Do a Google search for :"Free DVD for Gore's movie" and you get an interesting suggestion.

I was at a special screening and reception for Mine Your Own Business at the headquarters of National Geographic (!) last month. It is depicts the true state of the environmental cronies.

http://www.mineyourownbusiness.org/
The outrageous lies of the so-called environmentalists as well as their patronizing attitude towards third world countries was disgusting.

re Update #2 "He [Ehrlich in the Sixties] dismissed the responsibility of the two most populous countries, China and India, from having to adopt the drastic steps he advocated the U.S. must first take." Sounds familiar... Oh yeah, ignore that "brown cloud" from those same countries today until after the US has eliminated co2 (no matter how many cows have to wear catalytic converters).

I just happened upon your blog. I guess I could be referred to as a "Right on the Right Coast" then. If you have the link, or anyone else for that matter, I would love to do the same. Hearing people call you closed minded reminds me of what my friends referred to me as when Farenheit 9/11 came out. Keep up the good work. I like what I've seen so far.

A search engine yielded the following link, which tells about the giveaway and includes the actual link:
http://www.canmag.com/news/4/3/6146

Just to clarify, we didn't watch the ENTIRE movie. Only an hour's worth. The parts "not related to biology" (that was actually spoken more than once) were fast forwarded through. Preeeeeetty ridiculous.

teaching your students to be as stupid as you are is criminal.