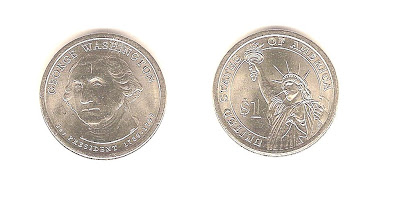 Trying to ride on the coattails of the State Quarters Program, the Congress has authorized the Presidential Dollar Program. This new program will commemorate four dead Presidents a year (you can't be alive and have your face on these coins), and there will be a gold $5 commemorative for the First Spouses in parallel with the circulating dollar coins.

There are 3 "sides" to these coins: the obverse, showing the president and the dates of his administration; the reverse, showing a flattering view of the Statue of Liberty as well as the $1 designation; and the edge, on which is inscribed "In God We Trust" (take that, Michael Newdow!), "E Pluribus Unum", and the date and mintmark.

The coins appear much more gold-colored in reality than they do in the scan at the top of this post.

I genuinely like the reverse. For most of our nation's history, representations of Liberty, and not of dead presidents, graced our nation's coins, and one would be hard-pressed to find a more beautiful, or a more symbolic, representation than the Statue of Liberty. This side of the coin is well done.

The obverses are hideous. They truly look like what you'd receive in a cereal box, or from a gas station promotion in the 60's or 70's (collect the whole set!). There is a complete and total lack of creativity that borders on amateurish. I'm disappointed.

I had high hopes for the edge lettering, but alas, was disappointed there, too. I had thought that the lettering around the edge would be raised, but instead it was inscribed. Honestly, the machine at Petco did a better job of inscribing my dog's ID tags than the Denver Mint did inscribing the coins I picked up at the bank last week.

My grandfather's 95th birthday was last Friday; really, how lucky am I, at my age, to still have a functioning and coherent grandfather around? Well, he certainly doesn't need anything, so I figured I'd just give him one of the new Washington dollars. After all, grandpa's old enough that he might have known George!
Posted by Darren at 12:24 PM

You're lucky. My grandparents, parents, and youngest brother have all passed away. In fact, I'm the oldest person in the family.

That was a hard thing to get used to.