The oldest man to travel into space so far:

WELL, THIS IS THE 21st CENTURY, YOU KNOW: Star Trek alum William Shatner, 90, becomes the oldest man to travel to space. Shatner “became the oldest person to ever to reach the edge of space — the Kármán line, which is 62 miles above Earth — on Wednesday when he traveled on Blue Origin’s New Shepard 4 for the 10-minute commercial flight. Shatner was emotional after he landed, saying, ‘Everybody in the world needs to do this.’”

He wasn't an astronaut yet when I met him, but he was still a fairly exalted figure: 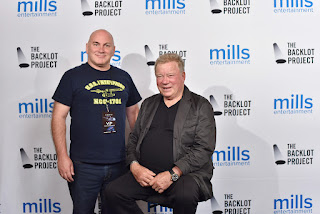