These People Are Disgusting

Biden is basically inviting continued harassment of senators of his own party but, hey, no mean tweets.

UPDATE (FROM GLENN): Seems like this gives Sinema and Manchin an excuse to switch parties and blame the Dems’ activist wing. Sure they’ll get grief from that, but when you’re already being chased into the bathroom. . . .

The Dems like harassing those with whom they disagree, and they especially like having the power of government behind them when they do it:

The Department of Justice is launching an effort to combat what it said is an "increase" in "threats of violence" against school officials and teachers across the country.

"Threats against public servants are not only illegal, they run counter to our nation’s core values," Attorney General Merrick Garland said of the effort in a statement Monday. "Those who dedicate their time and energy to ensuring that our children receive a proper education in a safe environment deserve to be able to do their work without fear for their safety."

The guy the Dems wanted on the Supreme Court now says that disagreeing with the local school board makes you a terrorist.  Nope, no way that's going to be abused.

Riot in the streets, rob from stores, burn down city blocks--FBI stands back.  Tell your elected school board you don't want your kids learning toxic racism in schools--FBI will be there to arrest you.

These people are disgusting. 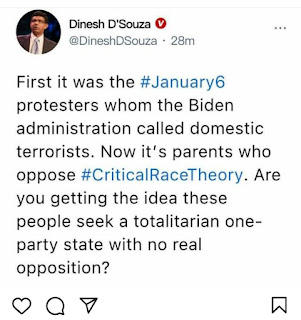