There are idiots supporting Sacramento's most audacious commie teacher:

Supporters of a Natomas Unified School District teacher filmed in an undercover video discussing antifa called for the district to allow the teacher to return to his position during a Wednesday news conference at the Sacramento office of civil rights attorney Mark Merin.

Natomas Unified has announced they plan to fire the Inderkum High School teacher, Gabriel Gipe, after a conservative group, Project Veritas, filmed him and published an edited 12-minute video of him sharing how he wants his students to become revolutionaries...

“After an investigation, Mr. Gipe was recommended for termination because he had violated many policies, Ed Code, and more,” read a statement from Natomas Unified. “As we shared, there are nearly 400 pages of charges and evidence. Mr. Gipe was actively teaching pro-communism ideology in a US Government class.”

The district said Gipe “was clearly representing his school and district” during the recorded conversation. His termination must be approved by the board of trustees...

Merin, who is not officially representing Gipe, said the district moved forward with its decision without due process.

“How is it that a school board can jump to a conclusion and announce a disciplinary job action against a fantastic teacher who is extolled by his students without the minimum due process that is enshrined in our state constitution, our federal constitution, and in the contract that teachers have with their school board?” Merin said.

I call BS here.  I have no doubt that Comrade Gipe was provided due process.  What it looks like he wasn't provided is what I call undue process, the purpose of which is to make eliminating the commie so difficult that the district just acquiesces.

The linked article goes on to identify several people speaking in support of Comrade Gipe.  This one, though, wins the idiot prize:

Sonia Lewis, a community activist who works with several school districts in the area, said teachers across the country are afraid of losing their jobs for speaking the truth in history classes.

“And that truth is simply the history of those who have been left out of Black and brown and indigenous, API, Latinx, LGBTQ, Muslim communities all over this country,” Lewis said. “Having taught social studies in this state, knowing the standards that are required to make sure that information is disseminated based on the information on standards and curriculum, I know for sure that revolution is change and it is positive.”

No one in California is afraid of losing his/her teaching job due to speaking in favor of the groups Ms. Lewis mentions.  No one.  Let me wear a MAGA hat to school one day (on Hat Day, no less) and let the complaints roll in.  BTW, I almost never wear hats, certainly not to school, and I wore that one only because it was a gift from a student.

Anyway, here's what I have to say to Comrade Lewis: 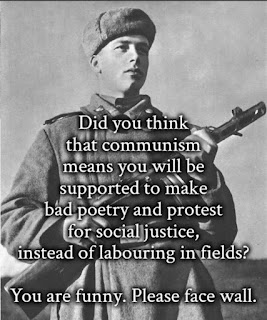 I spent the first several years of my adulthood training to kill commies, I'm not going to brook their nonsense now.

Previous post on the topic.  Here's a more subdued cockroach after the light was shined (shone?) on him.

Let's see how Communism works. First, "socialize" everyone's property. When this is resisted, recruit local psychopaths and give them the power to stamp out resistance. Pretty soon you end up with a nation run by psychopaths, for psychopaths. This is inefficient. With Nazi-ism you start out with the psychopaths already in charge.