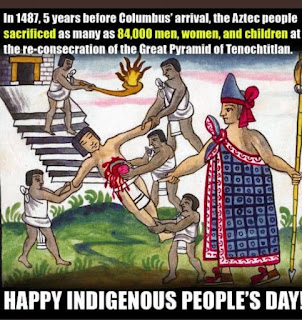 From Wikipedia, the source of all knowledge and wisdom:

Some post-conquest sources report that at the re-consecration of Great Pyramid of Tenochtitlan in 1487, the Aztecs sacrificed about 80,400 prisoners over the course of four days. This number is considered by Ross Hassig, author of Aztec Warfare, to be an exaggeration. Hassig states "between 10,000 and 80,400 persons" were sacrificed in the ceremony.[12] The higher estimate would average 15 sacrifices per minute during the four-day consecration. Four tables were arranged at the top so that the victims could be jettisoned down the sides of the temple.[19] Additionally, many historians argue that these numbers were inaccurate as most written account of Aztec sacrifices were made by Spanish sources to justify Spain's conquest.[20] Nonetheless, according to Codex Telleriano-Remensis, old Aztecs who talked with the missionaries told about a much lower figure for the reconsecration of the temple, approximately 4,000 victims in total.

Is there any people in history that hasn't been conquered by some other?  My own ancestors, the Britons, were conquered by Romans, by Angles/Saxons/Jutes, by Vikings, by Normans--whom did I miss?

Update #2:  If you offer a "land acknowledgement", a statement recognizing that your event is taking place on "stolen land", and you don't give the land back to the natives, aren't you just rubbing their noses in it?

Email ThisBlogThis!Share to TwitterShare to FacebookShare to Pinterest
Labels: discrimination/race