As long as I can remember, my grandparents always had an illuminated manger scene on their porch during the Christmas holidays. When I bought their house, the manger scene was included. Over time, though, the paint had faded and it looked old and dreary; displaying it like that didn't seem right.

So a few weeks ago I took it to school and our art teacher allowed some students to paint it up. For the relatively small expense of paint I got what appears to be a new manger scene. Here's a picture of it during daylight: 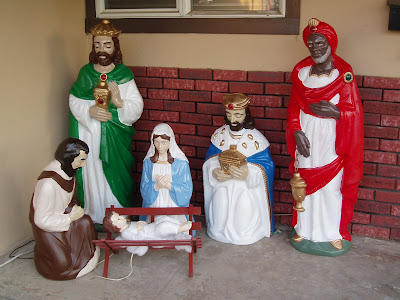 click to enlarge
When it's illuminated, the imperfections in the painting technique are clearly visible. 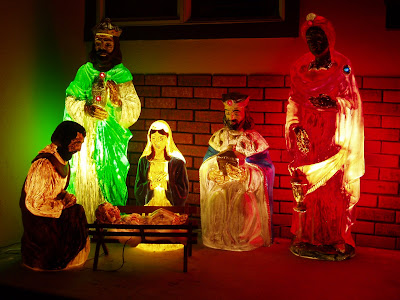 When lit and viewed from the sidewalk or street, though, it looks beautiful. Just like I remember it.

While I believe in the tenets of Christianity I'm not very devout. I display the scene as much to honor my grandparents as I do to honor the birth of Christ. Put another way, I believe enough to display the manger scene, but not enough to go purchase one if I didn't already have one.
Posted by Darren at 6:14 PM

One of our deacons has a sermon during Advent where he discusses the progress of his old plastic nativity scene. He talks about how it's tacky, but how he puts it up for his grandkids. He talks about the soldiers he bought at a garage sale to guard baby Jesus and the random animals that have become part of the scene, including one of those light up geese that were popular a few years back. It's my favorite sermon of the year. I personally think he should publishe the series in a book. So touching. I guess that's why the glue and glitter and macaroni art ornaments from my own kids younger days still hold a happy place on our tree. I talked about it at my blog. Have a merry Christmas.