My Dad's Parents, on Memorial Day 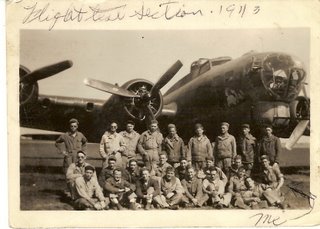 Both of my dad's parents served in uniform during World War II. Grandpa enlisted in the Army Air Corps well before Pearl Harbor, and spent the war repairing bombers in Britain. The picture above shows him, with his section, in front of a B-17--the same type of aircraft that has been flying low and slow over my house the last couple days. He served 20 years in the Air Corps/Air Force, and after retiring, served another 20 in the civil service doing what he did so well--repairing aircraft. He's rested here for the last 9 years: 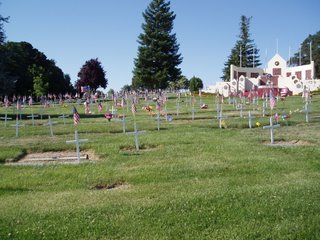 His grave is just to the left of the large military memorial.

Nana also served. She was a British subject when the war broke out, living in Coventry, and answered her country's call to duty by serving in the Auxiliary Territorial Service, a "women's branch" of the British Army. She rose to the rank of sergeant, serving as an IFF operator (identification, friend or foe) in a mixed-gender anti-aircraft artillery battery. In the following picture she's in the second row, just right of center. 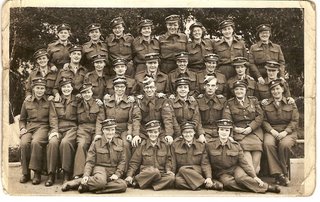 Nana was discharged from service in 1943. She's still physically quite healthy, and currently lives in an assisted-living community not too far from me. Her Alzheimer's Disease prevents her from telling me the stories she used to tell me about her wartime service, but I still remember them. She was tickled to pieces when I found an 8x10 picture of her in uniform, which she now displays it in her apartment at the home. Nana was proud of her service to her country.

Nana brought my toddler dad to the United States shortly after the war ended. They lived with my "grandfather's people" in the hinterlands of Pennsylvania until they could finally join my grandfather at his new assignment in Massachusetts. It was the first of many places across the United States where they would be stationed. She became a US citizen not long after coming here--and this country has seldom had a more devoted daughter.

Nana and grandpa met in late 1942. I used to have the v-mail grandpa sent to his parents in which he mentioned meeting "a new girl"; I hope to find it. They were married for over 60 years.
Posted by Darren at 5:55 PM

Tell your mom I said thanks for helping hold Hitler at bay.

You must be very proud of all of them as we all should be of that remarkable generation. This comes from a PROUD CHILD of a veteran of WW2, Korea, and Vietnam. I still tear up (as I am now after reading your post) whenever I hear our National Anthem and see our beautiful flag waving in the wind. Some may think that is corny but, I assure you there are many more of us out there. GOS BLESS AMERICA AND ALL THOSE WHO EVER PICKED UP A WEAPON TO DEFEND HER.

You are so lucky to have them share their service with you. So many of those that served in WWII came home, married, got a job and never let anyone know what went on, my dad among them. All I know is that he was 18 years old, made a sergeant because he had one year of college, ran the PX in Sasebo for the Occupation Forces. He never discussed the snipers that shot at them, or the fellow soldiers that suffered from what was called "Battle Fatigue" and attacked their peers. I have two sons that age, and I can't even begin to imagine. My father-in-law was a tank commander on Iwo and had a Bronze Star. All he ever told his kids was that he got it for "being stupid". While I admire their strength in silence, I think that every person who has a parent still living who went through that era in history should sit down and listen to the stories. One of the biggest problems I have with today's kids is that they think the world was created yesterday just for them. It would be so interesting for a history class to have a veteran visit and discuss what they experienced. I think so many of the protestors have no idea what really happened and why.

Nana was in Coventry the night it was hit by "the big raid". She, her sister, and boyfriend were in a shelter and the building above them started to collapse (it apparently had been directly hit). A few people scouted out, and then everyone left the shelter, ran across the street, and into the basement of a Lyons restaurant (she always made sure to say, "Yes, the very same Lyons we still have today.")

There's much more to the story, but you get the idea.

My mother's stepfather (I never knew her real father) was a SeaBee in the Pacific Theater.