We have a teacher at my school whose car is plastered with all the bumper stickers you might imagine from someone I'd consider a nutjob. It's good that I have such a strong stomach.

Have you ever seen the "Visualize World Peace" bumper stickers? What about their humorous sidekick, "Visualize Whirled Peas"? I like the latter.

A few months ago, some anonymous person put a bunch of "Stick it to Bush" bumper stickers in my mailbox at school. Reading the information on the back of the package I see, "Bumper sticker slogans courtesy of The Daily Kos" and "Manufactured in China". I'm not surprised by either of those statements. Oh, and "Copyright 2004 Herter Studio LLC, all rights reserved."

What libs don't get is that they're not funny. Evidence Air America, the talk show saviour of the American Left, and its dwindling fortunes. Libs thought that Colbert guy was funny, but I barely cracked a smile once during the whole routine. Anger isn't funny, and snide isn't funny. Incidentally, stupid isn't funny, either. "Sore Loserman", after the 2000 election? Now that's funny! Great play on words, and true to boot!

So back to my bumper stickers. Here's what it says on the back: "Celebrate your freedom of speech with these 10 hilarious, tongue-in-cheek bumper sticker postcards... Stick them on your neighbor's Hummer." Here are the bumper stickers, see if you think they're hilarious. 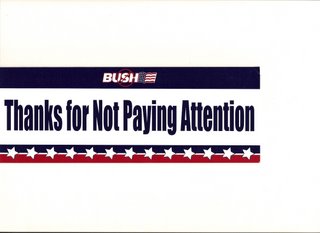 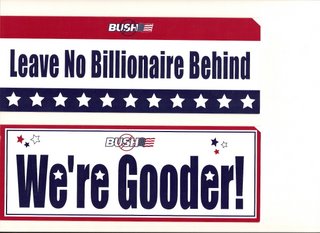 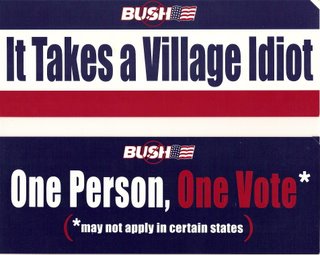 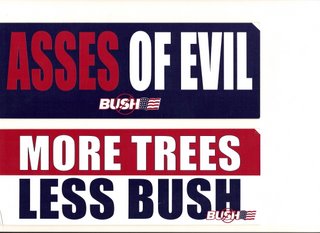 So, were you rolling on the floor laughing? I'm not. "We're Gooder!" is kind of cute, and "More Trees, Less Bush" isn't entirely stupid. But the others--are there really people who think those are hilarious? I mean, they're so stupid, they're such lame attacks that I don't mind discussing them here. If they were effective barbs against the President I'd probably just have thrown them away, but someone actually thought they'd get to me with these. To be funny, and to be effective barbs against the President, they need to apply directly to him, like the two I mentioned (as did the Sore Loserman poster against the babies it was directed against). "Leave No Billionaire Behind"? That's a slam on Bush? There are no billionaires who support Democrats (George Soros, Bill Gates)? "One person, one vote"? I guess Chicago and New Orleans have been run by President Bush for a long time....

Actually, when I get some hay for a b-b-gun target in the back yard, these stickers will *definitely* be among the first targets. Someone gave them to me as a gift, and I should get some use out of them.

You know what I just noticed??? Three were three missing from the pack! There's a list on the back, and one said "Bring Back Monica Lewinsky". Nope, wouldn't want me to have that little reminder, would we?

My guess is someone gave these to me to attempt to needle me. Didn't work; I didn't see them as effective attacks, or even effective barbs, against the President. Now, want to see something that will needle the libs? I want this t-shirt! Now that will cause fits of apoplexy down at the co-op, or in Berkeley, San Francisco, or Boston! I already have these three shirts, and I so enjoy wearing them in places where I know the libs will be a-gatherin'. =)

Watching them huff and puff? Now that's funny!
Posted by Darren at 8:56 AM

Just to give you a brain enema, here is the back of my evil, gas guzzling, V8, Explorer XLT. And at the range back in Indiana I frequented, I shot plenty of bin Laden targets -- not with BBs, though.

During the last political campaign, I was scared to put a sticker for a conservative candidate on my minivan. The prevailing attitude is that all conservatives are drooling neanderthals. I like to think I am a little above that. I have gotten in to some political discussions with a few of my fellow teachers, but largely I write them off as uninformed since most of them only watch CNN and only read McPaper or get "newsalerts" from their preselected candidates on the internet. Furthermore if I mention other websites such as Drudge or FoxNews, I am immediately written off as a loon. I try to be openminded and I really do read what candidates stand for and intend to do...but somehow I think I may be the only one doing this.

Folks in the center do it, Ellen, that's about it.

Libs thought that Colbert guy was funny, but I barely cracked a smile once during the whole routine.

As one of the people whose back Colbert pinned the "Kick Me" sign on, I guess you wouldn't.

But for the 70% of Americans who are disgusted with Mr. Bush ("The glass is 2/3 empty."), seeing the school nerd pin the sign on the school bully, in the middle of the pep rally, and the bully can't do anything about it except twist his face up into a major whine, now THAT'S funny! Who doesn't like to see arrogant assholes humiliated?

Face it, you are part of dwindling minority if you think Mr. Bush is a worthwhile individual. The great thing for me about never liking Mr. Bush is that I didn't have to change my mind about him as more facts came out.

Perhaps it would be funny, if Colbert has actually pinned a "Kick Me" sign on someone. About the only thing you said there that made any sense was calling Colbert a nerd.

I understand you were *trying* to speak metaphorically. In that vein I'll go with your story; the sign Colbert actually pinned on someone's back was "Please raise either your left or right foot and cause it to contact my clothing in the general vicinity of my gluteus maximus muscle, hard enough to annoy me but not quite so hard as to cause serious pain, because that would extend beyond the bounds of humor."

Personally I thought the bumper stickers were hilarious but then that's just me.
Speaking of bumper stickers, i recently went downtown and bought some peace bumper stickers. Hey, they were 4 for a $1 and I'm such a sucker for sales. Anyway, I got these stickers, went home and wanted to put them on my car. I mentioned it to a few like minded friends who warned me that putting a peace sticker on my car would get it keyed. I picked the less controversial one "Give peace a chance" by John Lennon. Two weeks later, someone scratched a line down the back of my car. A while after that someone keyed another mark. I sorry that people can't stand a message of peace. Still the key marks haven't discourage me, rather they have made me all the more determined to stand up for what i believe. I don't key your support the troops stickers, leave mine alone!

Honestly, this is the first time I've *ever* heard of leftie cars getting keyed. Usually I read about you lefties doing that kind of stuff. In either case, it's extremely poor form--disgusting, in fact.

Give Peace A Chance? When did we not? Are you one of those people who think we "rushed" into war? I hope not, you're smarter than that. What's important to consider when you're kumbayyahing is, peace on whose terms? If it's peace on Osama's terms, well, get used to covering yourself from head to toe.

I'd rather have war on our terms than peace on his.

I personally thought the bumper stickers were hilarious. Although, I am one of those "lefties" I'm sure you're so fond of. We all hate bumper stickers that express a different view than our own - I really doubt you didn't like them because they were "snide" and "stupid". If I see a car going down the road with bumper stickers that say, "Annoy a Liberal - Work hard and be happy." or "World Peace through Superior Firepower" the thought that I could always just rear-end them does cross my mind. But in the end, we all have a right to share our views through bumper stickers, even if they're stupid. We all like to have our fun. I'm sorry someone stuck those in your mailbox. I would think you'd be a bit more upset about that than what the bumper stickers actually said. Oh, and by the way, "We're gooder!" is the funniest bumper sticker I've seen yet. Don't you think it's sad that our president doesn't use correct grammar? And if it's an act to "appeal" to the American people, isn't it sad that our citizens prefer a blubbering idiot over someone's who is well-educated?

ProudToBeLiberal--the two bumper stickers you don't like, I thought they were hilarious! Just a matter of perspective, I guess.

I don't consider the President a blubbering idiot, however. Eloquence of diction would be nice, but it's certainly not required to avoid the idiocy label. There are plenty of liberals who speak well but whom I consider complete and total idiots.

I think you know about my new gas guzzling F150...I put the first three stickers on the back glass

"Houston 100 Club-Life Member" (they are a support group for cops and firemen)
"NRA-Life Member" (As Hester said it best, "From my cold dead hands!")
"I'd rather hunt with Dick Cheney than drive with Ted Kennedy" (Hey, at least Cheney calls the doctor first as opposed to his lawyer!)

I got the shirt with Che on it that says "Communism killed a 100 million people and all I got was this lousy T shirt" And one with Reagan in a Che Pose.

I decided a while back not to put anymore Christian or Republican stickers on my car, it got keyed everytime by some an understanding liberal.