The Reagan Library, In Pictures

Perhaps another time I'll add commentary about why President Reagan was so important, why we need another like him today. 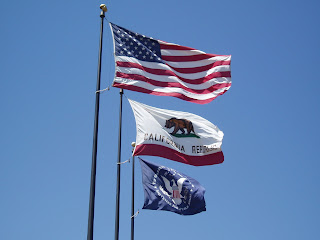 But for now, I'll let these pictures from his Presidential Library do most of the talking. (Flash photography was not allowed inside, so you don't get to see the Oval Office replica, etc. here.) Remember to click on the pictures to enlarge them. 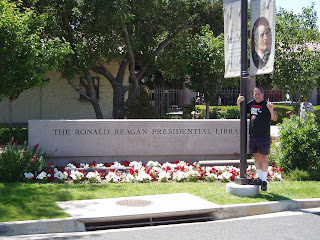 I chose this shirt to wear specifically because I think President Reagan would have liked it. He certainly agreed with the sentiment. It appears, though, that the camera has added several pounds. 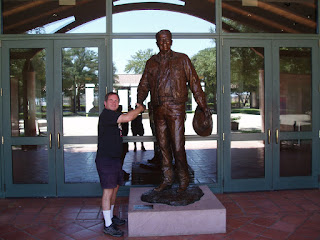 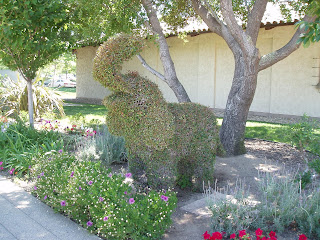 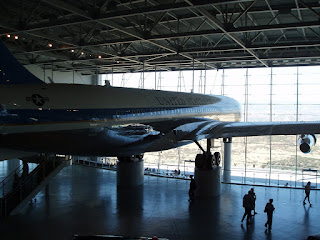 Air Force One. President Reagan had this 707; current presidents have a 747. 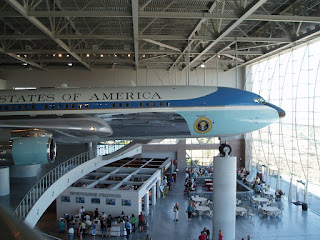 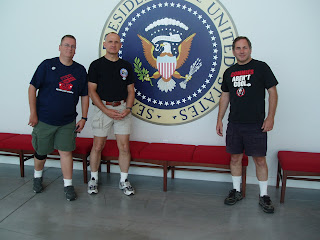 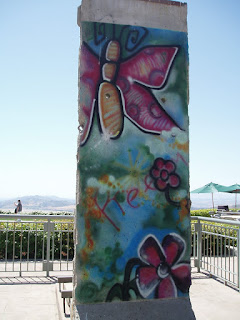 While this piece of the Berlin Wall is much larger than mine, the sentiment remains the same. 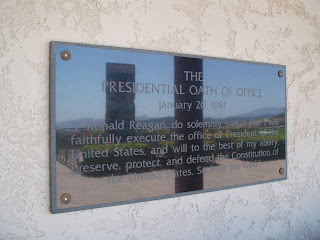 The Berlin Wall section is reflected in a piece of polished stone. 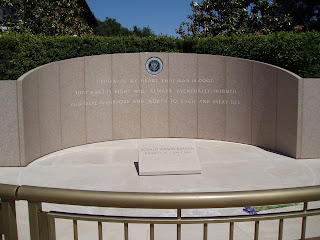 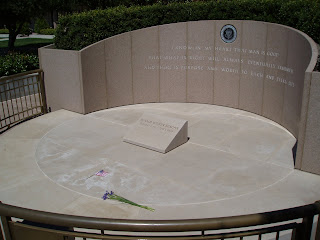 Good-bye, Mr. President. And thank you.
Posted by Darren at 6:31 PM

I used to live there and have been numerous times. I couldn't wait till they opened airforce one. Thats pretty amazing huh? To think that technology which seems old to us could have blown up the world!

I even got to do some research as an undergrad in the library. And I stood in line for 13hrs to see him after he died.

Glad you got to go!

i do believe that the actual air-force one is kept at the air and space museum in tucson, az....or am i thinking the air-force one for kennedy?

I'd be surprised if Kennedy had had a 707. This was definitely Reagan's.

This 707 was used from “Richard R Nixon” until Reagan. One of the last things Reagan did was get the purchase of two 747s approved for presidential use. More than one 707 was used by the president in his term and another one of these planes may be what you were referring to in Tucson AZ.

I remember when I was at Andrews Air Force Base for a few days in January 1990 and running along the air field. I turned and saw an awesome sight. The new Air Force One Boeing 747. It was shinny and beautiful.

I've got that T-shirt.

Your photos brought back great memories. My best friend and I went in August last year. Security wasn't too amused when I had to pull her off the cemetery railing -- she was wailing and preparing to throw herself on the grave. (And later, I almost got us thrown out by insulting the JFK library to a couple of the older lady docents. They figured a MA resident would love Jack.)

one of the old Air Force One jets are there, i can't remember which president's though

I kept my tears in check at the grave site, but not inside during the video about Ronnie's life (and funeral).

“rightwingprof said...
I've got that T-shirt.”

Which t-shirt is that? The “Commies ain’t Cool” or the “Operation Chaos” shirt?


"Scott McCall said...
one of the old Air Force One jets are there, i can't remember which president's though"

It was probably just one of the other presidential 707s. I know they had at least two.

Between the Reagan and Nixon Libraries, I spent half our California vacation in tears. Beautiful shots! (I love the handshake photo. I climbed up next to him, but looked like a midget!)