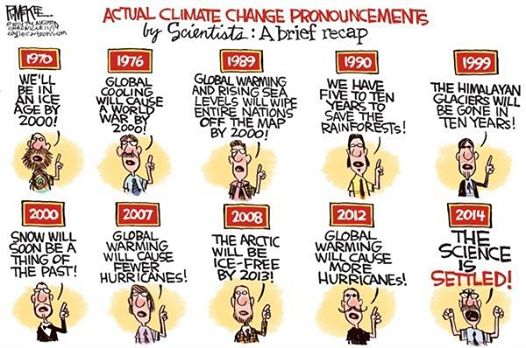 I haven't EVER heard of a scientist that has said "The science is settled". And also I remember you quoting Dean Baird saying that you'll believe there is a crisis when the people that tell you there is a crisis act like there is a crisis. Just to point out the stupidity of that statement, students at your school were claiming that there was a crisis in administration in an incident at your school, and they protested. However comments on here show that you didn't feel as if there was a crisis in the situation. It's funny how when your faced with evidence the best refute that you have is a non-logical claim and propaganda like this.

That about sums it up, doesn't it? Awesome!

I notice that you say no "scientist" has said "the science is settled", and that may or not be true. The Church of Global Warming adherents certainly say it, including the Reverend Al Gore: http://www.thescienceisstillsettled.com/
Do *you* not think the science is settled, or might I be right?

So essentially, anonymous, your entire comment is worthless. Care to try again?

Wow I can't believe that you feel your picture is credible because a church would say something dumb like that. And if you didn't notice, the top of your picture says "By Scientists". If you would like me to teach you a lesson in why you're wrong about human caused global warming, i'd be happy to create a post explaining it. You do realize though that that your entire picture is worthless, as many of these statements are not stated by scientists (which is what your picture claims them to be) maybe find a better picture if you want to convince anyone about your opinion besides yourself :)

What evidence? A specious, scientific consensus isn't evidence and neither are carefully doctored charts. Both are attempts to create proxies for evidence that'll serve in the political debate, by aping the credibility that arises from evidence, but neither's evidence.

That's why the enviro-left is losing. The public you lefties disdain can be fooled for a while but eventually the phoniness of your claims negates their power and the public loses interest. As is currently happening.

As public support evaporates the political fate of enviro-extremism becomes increasingly dependent on the very obviously self-interested - Archer Daniels Midland, General Electric, the farm lobby and others only interested in cutting themselves off a fat slice of tax money.

I wonder what'll happen to you and you're like when it becomes inescapable that you're nothing more then an unpaid lobbyist for big business?

Here's a scientist who says it :)
http://www.americanthinker.com/articles/2014/04/global_warming_and_settled_science.html

The fact of the matter is that the earth is getting warmer. The consequences of that can be any one of these. Just because we are not entirely sure what the consequences are does not mean there won't be any. President Obama is doing a FABULOUS job at controling this. He is the best President ever.

It seems as if you (Darren) and Allen (in Michigan) are rather ignorant of the overwhelming evidence and that you simply cherry pick at certain people who have credentials in order to support your ideology. I would gladly show you the overwhelming evidence if you wish, yet i'm not so sure you hardcore right wingers would accept evidence for global warming if it smacked you in the face :)

The president's an idiot, as are those few remaining bitter clingers who still support him. He's done *nothing* to heal the earth or help the seas or whatever he was going to do. Hell, his trip to Copenhagen when he still was a somebody internationally didn't accomplish anything.

If there were "overwhelming" evidence, I'd accept it. But there isn't.

See, this shows what I always say. I think libs are wrong, they think I'm *evil*. I mean, why else would I not believe in global warming, right? Or am I stupid, or a dupe of Big Oil, or some other convenient (simple) explanation?

Seriously, if you can't come up with a legitimate reason to be skeptical of this hoopla then you should seriously reconsider which of us it is who's blinded by ideology.

IF I'm wrong, and at this point it's a big IF, it's only because libs have cried wolf too many times. Read here to 10 such cases in just my lifetime:
http://rightontheleftcoast.blogspot.com/2009/11/climate-change_27.html

You know, the last time Peter cried wolf there really was one, but no one believed him any longer. Can't really fault the woodsmen/hunters for that.

You wouldnt accept the fact the earth is melting if it happened right before your eyes (because it is). This is why congress is a mess. We have people from BOTH parties that will never be bipartisan. So when we say the earth is heating up the Republicans say its not just because we said it. Just look at two things. First, look at the earths average temprature per year. You will see a moderate increase. Second, look at the polar ice caps. Look at the current pictures of them and pictures from 20 years ago. You will see a massive difference between the two pics. Also look at Al Gore's "An Inconvenient Truth." When watching it keep an open mind.

"The fact of the matter"? Does that formulation derive from the bald assertion that "the science is settled"? They both have a similar disdain for science while attempting to steal the credibility science has gained by the unbending requirement that assertions must be proven. I guess that tiresome requirement doesn't apply if you're really, really sure you're right.

I appreciate your offer to show me "overwhelming evidence" but the scientific method, in which you're trying to cloak yourself, doesn't depend on quantity. Quality's the coin of the realm and the evidence is only good enough to serve if it's a valid test of your hypothesis.

Not only doesn't your "overwhelming evidence" provide a test of the hypothesis of anthropogenic global warming, there isn't even an attempt to test the hypothesis. You guys assume unquestionable correctness, admit of no possibility of error and ignore all criticism where you can't silence it.

How arrogant of man to believe that he has the capability to actually change the climate to any appreciable degree.

It's very convenient for some people to assume that I'm stupid because I disagree with them.

I actually seek "evidence", anonymous. You don't provide it, and An Inconvenient Truth isn't evidence. Sorry.

I don't argue that the average temperature on earth has increased over the last century, but it's been stagnant the last 17 years and the Church of Global Warming models certainly don't predict that. We're coming out of a mini-Ice Age that lasted until about 1850, long before SUVs were on the planet. Earth's climate always changes, it goes in cycles, and my guess is it's caused by that big golden thing in the sky.

One of the bad features of a representative form of government is that it's always possible to fool enough people to get law passed. The counterbalancing good is that the same people just refuse to stay fooled which is why the entire enviro-extremist agenda is on life support.

I would never dispute that the Earth is warming. Clearly, over a long period of time, it has. The thing I dispute is the unproven claim that Man is predominantly the cause for the warming. Like Darren says, the Earth warms and cools in cycles. That much we know for certain, and that is proven in the fossil record. HAS Man had SOME KIND of impact? Sure. My only argument is that nobody has proved what the impact of Man's activity specifically has been.