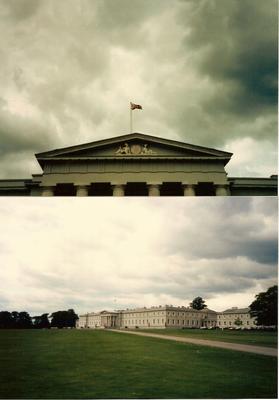 Britain's Royal Military Academy, Sandhurst, is not located in Sandhurst, but in nearby Camberley. I know this only because I was fortunate enough to be one of four members of my class to serve as exchange cadets there in 1986, during the summer before my senior year at West Point.

That summer dozens of my classmates and I went to military academies around the world for two weeks. My best friend went to Bolivia, a roommate went to Greece, others I knew went to Germany, Australia, and other such places. The Cold War was still on; Soviet and Eastern European academies likely weren't on the roster of available sites :-)

The Brits treated us well. We spent about 7 days training with the Sandhurst cadets, and the other 7 days were sent out to tour the surrounding area. There was a day or two in London, a day in Oxford, visits to Stratfield Saye House and Blenheim Palace and Beaulieu Abbey. Each night the cadets were given 50 Pounds, about $75 at the time, and told to "show the Americans a good time." As you might imagine with a bunch of 20-somethings, "a good time" usually meant a pub somewhere. It's funny how often you almost get run over when you've had a few too many and only look to your left for traffic when starting to cross a road (Brits drive on the left side of the road and hence traffic comes from the right). One night a group of officers took us into the Officer's Mess and we had a few there, then played 'mess rugby'. In suits and ties. I have pictures of some game of athletic prowess called "High Cock-a-loren", phonetically speaking.

I could ramble on and on about Sandhurst and what I learned about Britain and its army, but no, that isn't the point of this post. All of this lead-in was to bring you to this story--Prince William will be attending Sandhurst. Don't know if his younger brother Harry is already there yet or not, but his admittance was the subject of a minor scandal some months ago.

The pictures of Old College at Sandhurst, above, were taken in June 1986.
Posted by Darren at 9:34 PM