Hiatus Is Over, And Now I Need To Rest!

I didn't sleep much Friday night, but I was up bright and early Saturday to catch my flight to Las Vegas!

Went with a friend I've known since elementary school.  We stayed at Caesar's Palace--the room was indeed palatial, check out the view! 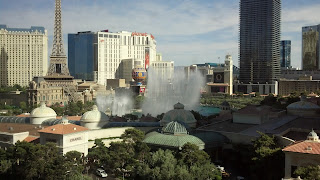 We kept ourselves busy on Saturday by going up the Stratosphere Tower, watching a performance of the Fountains at Bellagio, and checking out the stores at the Forum Shops and at the Venetian/Palazzo (chosen since we went to Rome and Venice last summer).  While in the Venetian I saw signs that the marine artist Wyland was in the gallery doing signings; I didn't get a signature, but we talked about a couple of his Whaling Walls that I've seen and I got this cool picture with him: 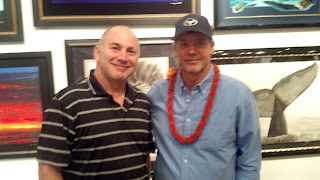 Sunday morning we headed over to Luxor to see the Titanic Exhibit, which was absolutely amazing.  They even have a wall-sized piece of hull plating! We planned to go hit the swimming pool in the afternoon, but every seat was taken.  Here's a shot of just one of the 7(?) pools in the complex: 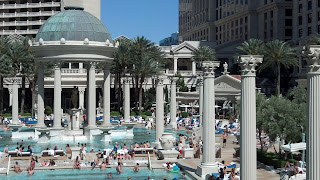 The culminating event, and the raison d'etre for the trip, was the Fleetwood Mac concert at the MGM Grand.  I had tickets to see them in late 1982, but Stevie "caught a cold" and when the tour was rescheduled, Sacramento was left off the list.  I've since seen keyboardist/vocalist Christine McVie, guitarist/vocalist Lindsey Buckingham, and singer Stevie Nicks on solo tours, but now, more than 30 years later, I finally got to see Fleetwood Mac (minus Christine, who doesn't tour anymore) as a group.  It was extra special because the concert was on Stevie's birthday :-) 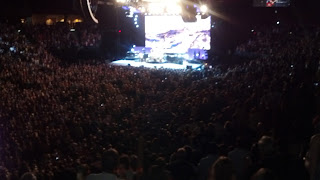 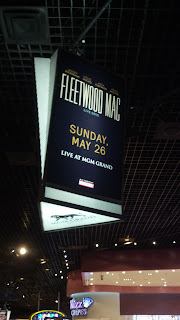 It was an early morning today, but we made it back. I'm exhausted--I need to rest after this holiday weekend!

Update:  Oh, I forgot to mention that I had emergency exit row seats on both flights.  Score!
Posted by Darren at 5:12 PM

Glad you had a good time! Meanwhile, I was (happily) freezing my arse off in a tent at Tahoe.