OK, so it's not Philadelphia at all, but West Point! Yes, I returned to my alma mater and, thanks to meeting up with 2 cadets and a major, I got to show my son things most visitors would never see--and it never occurred to me before how 99% of the cool stuff to see is off limits to visitors!

Here are pictures of our "escorts" as well as a couple others: 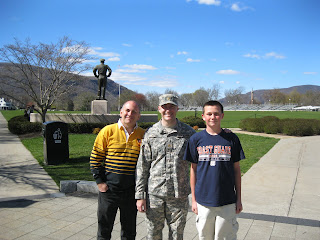 Austin and I with Major Autin, who got us into the gym and into the barracks, standing near Eisenhower's statue and the Plain (parade field) 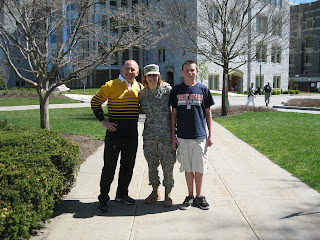 Tricia, daughter of my best friend at West Point. She got us into the Mess Hall to eat dinner with the Pep Band, and then up on the Poop Deck during dinner while the Pep Band performed there. What a treat! 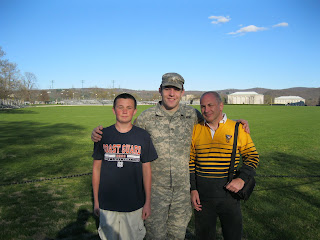 Carson is a former student of mine. He took us into Thayer Hall, which is one of the academic buildings, and Grant Hall, which is a much nicer "cadet restaurant" than it ever was in my day. We also took a drive around post to see how much had changed. 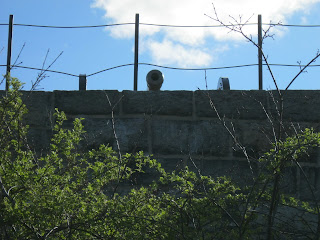 Fort Putnam is a Revolutionary War-era fort that was part of the original fortifications at West Point. Access was closed, but here's a cannon peaking over its wall. If you don't know, Fortress West Point played a very important role during the Revolution, keeping the British from controlling the Hudson River and splitting the colonies; Benedict Arnold is a traitor because he tried to get the plans to Fortress West Point to the British (all for the love of a woman). Fort Putnam was just one of many fortifications there, but it's the only one that remains. 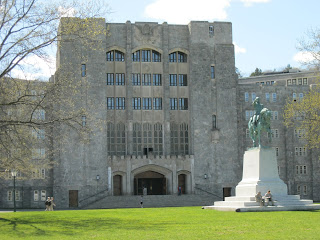 Washington's statue in front of Washington Hall, the lower half of which comprises the Mess Hall. It's also in the center of an imposing set of buildings that usually makes the tourists go "ooh" and "ahhh".

If I remember and find time, after I get home I'll try to post some of the video I took today--but it's been a long day, and now I need some sleep!