The answer to yesterday's question is:
10 Downing Street.

There's a short if not mildly entertaining story behind the picture below. In the late Spring of 1986 I was one of four cadets sent for two weeks on exchange to the Royal Military Academy at Sandhurst. We trained with the Brits for about seven of those days and toured on the other seven. One day we ended up in London.

I was disappointed to see that Downing Street, a very short dead-end street, was blocked off and one bobby was guarding it (clearly he was for security theater only, as one cop couldn't do much of anything). I mentioned to him how disappointed I was, because I'd have liked to take a picture of #10. I should be embarrassed to admit this next part, but since I only did it a couple times in life I guess it's not so bad--I name-dropped. I told him I was a cadet at the US Military Academy on exchange to Sandhurst. He asked if I had any identification, I showed him my ID with "Cadet USMA" listed as rank, and that, along with my short hair and American accent, must have convinced him I was legit. He told me to go quickly, stay on the left side of the street, take my picture quickly, and check back in with him when I was done. 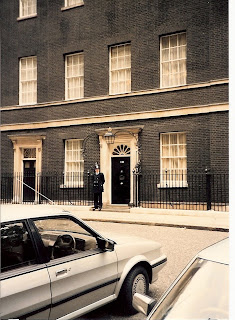 And that's the story of the picture above. The bobby outside #10 did not react to my presence at all, even though he and I were the only two people outside on the street.

I've been told that #10 doesn't have a doorknob on the outside of the door because there's always someone on the inside ready to open the door. The picture above seems to confirm this.

And now for today's question:
In what country is Waterloo, the site of Napoleon's last battle, located?
Posted by Darren at 4:00 PM

It's near Brussels, in Belgium.

Napoleon met his Waterloo in what is now Belgium.

As I recall from my days in high school when I studied such things, the Battle of Waterloo took place just outside of Brussels in Belgium.