The Robert and Margrit Mondavi Center for the Performing Arts is a rather nice venue at UC Davis.  Before last night I'd been there twice before, once to see Margaret Cho perform and once to see a student of mine play concert piano.  Last night, though, I was there for a different reason:

That's right, there was a special screening of Star Trek II: The Wrath of Khan followed by an hour talk/Q&A with Shatner and the UC Davis chancellor, who is also a Star Trek fan.

It wasn't a convention, but there was certainly some of the convention vibe. Some people even showed up in uniform. Others of us just represented: 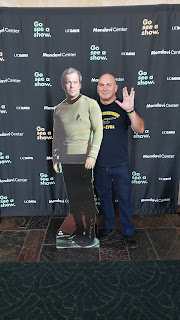 When the opening credits began, there was clapping and cheering as each actor's name appeared on the screen. And later in the film when Kirk cried out his iconic "Khaaaaaaaaaaaaaaan!", the auditorium erupted.

After the movie the chancellor and the Captain had a one-hour talk up on the stage. Shatner likes to tell stories, and he overacts when telling stories as much as he does on screen. He has a wit about him, but I wish they'd talked a little more about Star Trek in general and Wrath of Khan in particular, though. 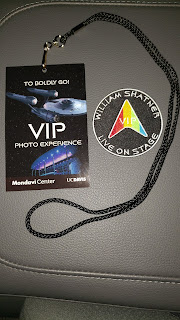 When the talk was over, those of us who'd signed away our firstborn children took our VIP passes and were led backstage, where we got a picture with the Captain. There was no time for chit-chat or autographs or anything like that--just stand next to him, take the picture, and go. There were 2 women in front of me in line, so when I approached Shatner I said, "All these good-looking women, and now you get me." He smiled at that, we took the picture, and just before I walked off he looked me in the eyes and said, very quietly so that it seemed a personal moment only between us, "Thank you." Just as quietly I said, "Thank you", and that was it.

This morning I got to download my picture with him: 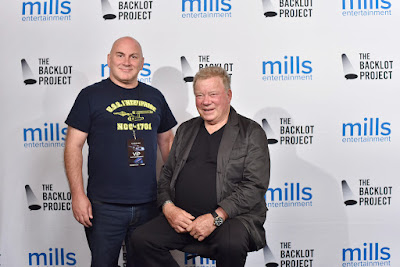 While he doesn't look bad for 88 years old, he's still 88 years old.  I can't imagine it'll be too much longer before he joins so many of his crew already in the cosmos.  That's why I paid extra for my less than 10 seconds with him--10 seconds, and those few words that passed between us.
Posted by Darren at 12:50 PM

That is sooooo cool. Well worth your firstborn.

So...does your firstborn know he reports to Shatner now?

There's a movie series that has started at the Statler in Dallas. We went to the first one which was "Blazing Saddles" with Burton Gilliam. Interesting and very nice guy. They are talking about having some iconic movies and some big name stars and directors in the future. Fun movie, fun show.

I came here to check out pictures of trees and national parks ... did not expect to see THIS!!! What a hoot!!!

Now, because of that, I have to share this.