Grumpy Greta is past her sell-by date.

First, there's always the hypocrisy with these people: 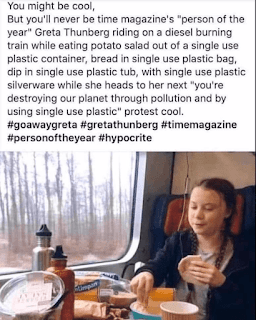 You could be forgiven if you were suckered in by the fact that she's a teenager with disabilities, but she's so sincere.  But the mask has started slipping.  A couple of weeks ago she let us know that it isn't just about so-called climate change, but also “colonial, racist, and patriarchal systems of oppression.”  Now she's gone full-on Marxist:

Greta Thunberg told cheering protesters today 'we will make sure we put world leaders against the wall' if they fail to take urgent action on climate change.

The Swedish teen activist was addressing the crowd at a Fridays for Future protest in Turin, Italy.

Scratch a leftist, a totalitarian bleeds.

Update:  Her explanation of her comment seems reasonable enough, assuming that she was in fact ad libbing:


Critics alleged that the remark, delivered in Turin, Italy, meant she was advocating for violence against world leaders who dodge their responsibilities to fight climate change...

“That’s what happens when you improvise speeches in a second language. But of course I apologise if anyone misunderstood this,” she continued. “I can not enough express the fact that I - as well as the entire school strike movement- are against any possible form of violence. It goes without saying but I say it anyway.”

I'd give her the translation problem, but not her ideals that leftism = peaceful solutions.
Sure, the "climate strike" movement was peaceful, but it's still a bunch of gullible young folks who want to feel special (and skipping school! fight the power!) being stage managed and groomed for future protesting, which may not be so peaceful.
Thunberg has not been educated, by her managers, about the greater context of her ideology.

Or she suffers from Obama syndrome, and can't stay on message without a pre-scripted teleprompter telling her what to say. Take away Telly P and they accidentally say what they really mean.

"Anonymous", tell me where I've hurt you.