A Canadian Gets It

Despite our thousands-of-miles-long border and kinda sorta common language, there are significant differences between the cultures of the US and Canada.  In many areas I find Canada to be much more culturally similar to Europe than to the US.  There isn't much of a "small government", American-style "conservative" right in Europe or in Canada.

That doesn't mean there are dissenters up north, just that they're much fewer and much quieter than we are in the US.  The owner of this vehicle though, might be home in many parts of the US: 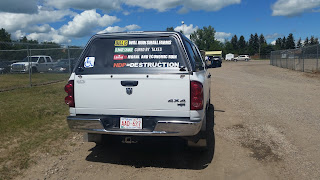 The author of this article understands as well:


The progressive dislike of handguns and certain kinds of rifles in Canada isn’t a public policy issue. It’s an ideological preference. Millions of Canadians do not understand how tight our laws already are, how they could be reasonably improved, have no interest in shooting sports and cannot fathom why anyone would feel differently. They’d rather live in a country with fewer guns. For a brief moment last year, there was a news story that gave their cause ammunition, but even when that story was completely debunked, the focus on legal guns remained. This isn’t about gun control. It’s dislike for guns and gun owners.  (boldface mine--Darren)

That’s fine. We’re all entitled to our views. But it’s important we be honest. The changes the Liberals will soon bring down will cost hundreds of millions of tax dollars, anger and inconvenience thousands of citizens and devastate a thriving sports shooting industry, but won’t stop the shootings in our cities, or, Canadian data suggests, reduce suicides. It’ll just disarm law-abiding, non-violent Canadians. That’s the goal. It always has been.  (again, boldface mine--Darren)

Leftists always seem to operate from the same playbook.
Posted by Darren at 11:40 AM