"The Whole Climate Crisis Is Not Only Fake News, It's Fake Science"

I've long been a fan of Patrick Moore, the co-founder of Greenpeace, who's modified his stance somewhat:


If Patrick Moore believes in carbon dioxide as a benefit to the climate, how could he have helped found Greenpeace? He argued that it was the organization that changed from its original mission, not him.

"I was one of the Founders doing a Ph.D. in the late 60s, early 70s in ecology. I was radicalized by the Cold War and the threat of all-out nuclear war and the emerging consciousness of the environment and we did a lot of good things," he recalled. "We stopped nuclear testing in Alaska. We have stopped it in the south pacific. We saved the whales. And we stopped a lot of toxic waste being put into the ocean. And the air."

"But, by the mid 80s we had gained a lot of notoriety and we were bringing in a lot of money and we were hijacked by the extreme Left who basically took green peace from a science-based organization to an organization based on sensationalism, misinformation, and fear," Moore insisted.

So what is he saying about climate change?


On Tuesday morning, Patrick Moore, a founding member of the environmentalist organization Greenpeace, slammed climate alarmists for promoting a fake emergency. President Donald Trump tweeted his remarks shortly after he made them.

"In fact, the whole climate crisis as they call it is not only fake news, it’s fake science. There is no climate crisis," Moore, author of the book Confessions of a Greenpeace Drop-Out: The Making of a Sensible Environmentalist, told "Fox & Friends" Tuesday morning...

The Greenpeace founding member did not deny that climate change is real, but he insisted that it is not a crisis.

"Yes, of course, climate change is real. It’s been happening since the beginning of time. But it’s not dangerous and it’s not made by people," Moore insisted.

What is climate change, if it's not a man-made imminent crisis? "Climate change is a perfectly natural phenomenon and this modern warm period actually began about 300 years ago when Little Ice Age began to come to an end," he explained. "There is nothing to be afraid of."

As for the alarmists, "that’s all they are doing is instilling fear. Most of the scientists who are saying it’s a crisis are on perpetual government grants."

Clearly I agree with him, as I've been saying the same thing for years. 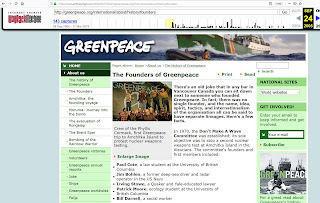 It's their own site, in their own words.
Posted by Darren at 4:11 PM

From Greenpeace Actual:
“Patrick Moore was not a co-founder of Greenpeace. He does not represent Greenpeace. He is a paid lobbyist, not an independent source. His statements about @AOC & the #GreenNewDeal have nothing to do with our positions.”

I get that you love casting Moore as a former leftie who crossed over. He’s not. He’s an old corporate lobbyist and nuclea4 power shill. He’s a darling of FoxNews. Nobody on the left has any respect for him. How can I make this any clearer?

George Will turning on the Party of Trump is a big turnaround. Patrick Moore turning on environmentalists ... happened long ago. And in Canada.

Snopes and Wikipedia, both beloved by the left, disagree.

Greenpeace does not consider Moore a co-founder of the organization, and the entity that became Greenpeace existed prior to Moore being affiliated with that group.

Wikipedia:
According to Greenpeace: How a Group of Ecologists, Journalists, and Visionaries Changed the World by Rex Wyler, the Don't Make a Wave Committee was formed in January 1970 by Dorothy and Irving Stowe, Ben Metcalfe, Marie and Jim Bohlen, Paul Cote, and Bob Hunter and incorporated in October 1970.[9] The Committee had formed to plan opposition to the testing of a one megaton hydrogen bomb in 1969 by the United States Atomic Energy Commission on Amchitka Island in the Aleutians. Moore joined the committee in 1971 and, as Greenpeace co-founder Bob Hunter wrote, "Moore was quickly accepted into the inner circle on the basis of his scientific background, his reputation [as an environmental activist], and his ability to inject practical, no-nonsense insights into the discussions."

Moore traveled to Alaska on advanced research with Jim Bohlen, attending Wave Committee meetings. In 1971, Moore was a member of the crew of the Phyllis Cormack, a chartered fishing boat which the Committee sent across the North Pacific in order to draw attention to the US testing of a 5 megaton bomb planned for September of that year. Greenpeace was the name given to the boat for the voyage and it would be the first of the many Greenpeace protests.[11] Following the first voyage, key crew members decided to formally change the name of the Don't Make a Wave Committee to the Greenpeace Foundation. These decision makers included founders Bob Hunter, Rod Marining and Ben Metcalfe as well as Patrick Moore...

In 1985, Moore was on board the Rainbow Warrior when it was bombed and sunk by the French government.[citation needed] He and other directors of Greenpeace International were greeting the ship off the coast of New Zealand on its way to protest French nuclear testing at Mururoa Atoll. Expedition photographer Fernando Pereira was killed. Greenpeace's media presence peaked again.

In 1986, after leaving Greenpeace over differences in policy, Moore established Quatsino Seafarms—a family salmon farming business at his home in Winter Harbour—and became a director of the B.C. Salmon Farmer's Association.[21] He later commented that he left Greenpeace because it "took a sharp turn to the political left" and "evolved into an organization of extremism and politically motivated agendas".


I'd say that Moore's characterization of himself is valid.

There is a reason I don't use Google for anything that approaches politics. Bing may not be perfect, but at least it didn't have an office in the Obama White House.

From a Bing search:

The Founders of Greenpeace

"...The committee's founders were Dorothy and Irving Stowe, Marie and Jim Bohlen, Ben and Dorothy Metcalfe, and Bob Hunter. It's first directors were Stowe, Bohlen, and a student named Paul Cote.

Canadian ecologist Bill Darnell came up with the dynamic combination of words to bind together the group's concern for the planet and opposition to nuclear arms. In the words of Bob Hunter, "Somebody flashed two fingers as we were leaving the church basement and said "Peace!" Bill said"Let's make it a Green Peace. And we all went Ommmmmmmm." Jim Bohlen's son Paul, having trouble making the two words fit on a button, linked them together into the committee's new name: Greenpeace.

Marie Bohlen was the first to suggest taking a ship up to Amchtka to oppose the U.S. plans. The group organised a boat, the Phyllis Cormack, and set sail to Amchitka to "bear witness" (a Quaker tradition of silent protest) to the nuclear test. On board were:

Please see the 3/18/19 update on this post. That should settle this debate once and for all.