I took a friend to Reno yesterday. I couldn't believe he'd never been, so I had to rectify that situation.

The drive up was nice--but there's no snow. I mean, it was bone dry the entire way there. We have no snowpack, which doesn't bode well for water supplies this summer. We've been through this a few times in my life and always survive, but I'm thinking that perhaps we ought to invite Al Gore out here to talk about global warming.

We stayed at my favorite place, Atlantis. I lost a few dozen dollars in slot machines, but made some of it back playing $3 blackjack. That certainly bouyed my spirits.

This morning we did breakfast at the Cal-Neva downtown, the location of my two favorite slot machines. They only have one type of payout, and you either win or you don't--they pay out early-20's silver dollars. They're worth about $10 each, and it costs 25 cents to play. I got $20 in quarters and started popping them in. After about $5 or so I won a single silver dollar, so I left that machine and went to its sister machine across the alley (if you haven't been to Reno's Cal Neva, don't ask!). A few dollars in that one was rewarded with another silver dollar. I also played Tailgate Party and got two cheerleader bonuses and a football bonus--even got the touchdown for big money, but no barbecue bonus. Made a couple of dollars at the Cal Neva.

The Sands Regency is a fun place. They have a Silver Strike machine there, and it was being pretty stingy towards the guy who was playing it. In addition to paying out money, Silver Strike can also pay out a silver $10 gaming token--and that's all anyone who plays that machine really wants. Well, I thought I'd be in pretty good shape since the guy in front of me wasn't winning any silver. I put in $20 (80 quarters) and started playing 3 at a time, the requirement to win the silver. I played it down to 6 quarters left and hadn't won the silver, and then--bam! I play 3 of my last 6 and won 2 silvers, or $20! At the same time I also won 5 quarters, so I cashed out with 8 quarters and $20 in Silver Strike gaming tokens for my initial $20 gamble. I was pleased.

I was also pleased to learn that I'll no longer have to ask for a non-smoking table in a restaurant--smoke-free, as of a few months ago!!!

We wandered a bit more and then headed home. I've always wanted to stop at the Emigrant Gap overlook on I-80, and today for the first time I did. Take a look--everything you see should be covered with snow. Eek. 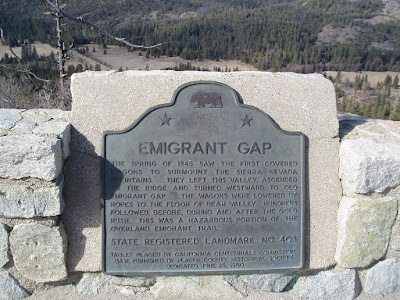 The first picture is about a 180 degree panoramic view stitched together from 4 individual shots. The second gives you a little information about Emigrant Gap--and how amazing the original American settlers were.

Tomorrow I think my son and I are heading to Oakland to see the USS Hornet and the Western Aerospace Museum. If we go, I'll post more pictures.
Posted by Darren at 6:37 PM

I had a recent post concerning James Reed of the Donner Party and his connection to Abraham Lincoln - springfield, Il 1846. Reed made a fortune in Placerville.

The main company I'm contracted to is on Donner Lake and I frequently fly into Reno and stay the night.

Thanks for the tips!

Does the Cal-Neva still have that $1.99 ham and egg breakfast?? Yum!! Gotta love Reno for good, cheap food at the casinos.

Congrats on your coins. Glad you're enjoying the break. And you're right, we are going to pay for the lack of snow-pack.

The Donner Party was mentioned in my book on the history of Sacramento, a book that focused heavily on John Sutter. A couple members of the Donner Party made it to Sutter's Fort in Sacramento, where a rescue operation was mounted.

Just thinking about the Donner Party, though, gives me the yuckies. I don't fault them, but it's still yucky. And driving over that terrain--I've long wondered how anyone ever got anything, especially wagons, over those mountains. Given the plaque in the picture, now I know!

Now on to Reno. I don't recall a $1.99 ham and egg breakfast. The casinos are getting away from giving away food, having learned they can charge for it! The best breakfast going is the $4.25 Big Win Breakfast at the Cal Neva--3 pancakes, bacon/sausage, eggs, toast, and hash browns--served in the Top Deck Restaurant. At one of the smaller food places in there you can get a hot dog and beer for $1.99.

Full priced buffets are available at Atlantis and Circus Circus. I've been to others up there, but these two are the best--and Atlantis is the bigger/better.

Any other Reno questions? I should work for their Chamber of Commerce.

I climbed a mountain up in Emigrant Pass last summer... Can't remember what the darn thing was called, but it was a hell of a hike and had some great views.

My jaw dropped when I saw your pictures--I can't believe the lack of snow. Wow.