A couple weeks ago I wrote about California's proposed race-based math framework.  That post gave just an overview, and now I will start to go into much more detail.  It will take me a few days of writing to do justice to this topic, so I guess I'd better get started.

Here is the link to the proposed framework.  In case the link disappears, or different material appears at the link, here's a screen shot of the relevant parts: 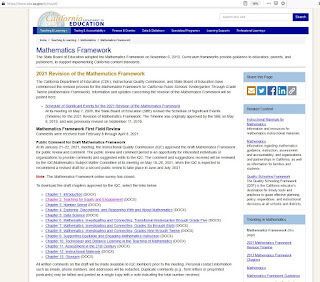 The first thing to notice is the title of the 13 chapters.  Two of the 13 chapter titles reference "equity" or a variant, which tells you that this is a race-focused "social justice" document.  If the titles referenced "quality" or "improving achievement", I might be genuinely interested in their contents.  But you would have to be clueless or disingenuous not to know that "equity" as it's used in education today is a reference to the achievement gap between mostly whites and Asians at one end of the performance spectrum, and black and Hispanic students at the other end--and about how this disparity implies "systemic racism".

This is a race-based document, one that denigrates actual math achievement and is focused on pitting people of different races against each other.

You may think that statement sounds harsh or hyperbolic, but I will demonstrate that it true.  On her own blog today, Joanne posted that Making Math Easier Isn't Equity and The War on Merit Hurts Students.  Both of these statements are true and are applicable to this post.

Chapter 2 is called Teaching for Equity and Engagement.  I read it entirely.  It had a lot of vignettes in it, and for awhile it seemed the chapter was going to be mostly about engaging students.  There were warning signs, though, like this from page 2:

A focus on equity recognizes that mathematics, over the years, has developed in a way that has excluded many students (see Chapter 1).  Because of these inequities, teachers need to work consciously to counter racialized or gendered ideas about mathematics achievement...It is common for people to claim that avoiding aspects of race, culture, gender, or other characteristics as they teach mathematics, means they are being equitable; but the evolution of mathematics in educational settings has resulted in dramatic inequities for students of color, girls, and students from low income homes...

I don't accept their solution, though, of steering away from math and towards racial hatred.  Why do I think that's where it's headed?  Because 29 pages into Chapter 2 I get to a subheading called Teach Toward Social Justice:

Mathematics has traditionally been viewed as a neutral discipline, which has occluded possibilities for students to develop more personal and powerful relationships to mathematics and has led too many students to believe mathematics is not for them.

Mathematics is a tool, nothing more.  In that way it's like a pencil or a hammer.  You either learn how to use it well or you don't.  Its value comes in how it's used--and as you are well aware, I'm not a fan of so-called social justice.  To the authors of this document there are no right and wrong answers--in fact, we should "[remove] the high stakes of errors".  Without errors, there is no learning.  What are the "high stakes"?  There's more:

Learning is not just a matter of gaining new knowledge--it is also about a change in identity.  As teachers introduce mathematics to students, they are helping them shape their identity as people...

I call complete and total BS on that.  It's a lot of words meaning nothing--but it provides a wedge to slip in the social Marxism:

What they're talking about is that white and Asian boys--but I want to see data on the performance of other groups in schools.  It's rare that I have a class in which the highest perform is not a girl.  Chapter 2 gives us more:

allow native and home language use

Use discourse as a means to disrupt structures and language that marginalize students.

I'm not a polyglot.  In my training I learned it was unreasonable to expect students to act as interpreters.  How am I to evaluate the mathematical knowledge of students if we cannot communicate in a common language, and it's wrong to expect the right answer from them?  And isn't it more than a little racist to make assumptions about students based on their biological sex, skin color, or national origin?  Of course it is, but that's what I'm being told to do.

I'm not sure what color, sexual orientation, or gender those parabolas are in my textbook *sigh*.  But I should probably find out:

This is what is now important when we (pretend to) teach math.

Those are interesting topics--but they're social science topics, not math topics.  As a math teacher it's my job to teach students how to wield the tool, let them explore those social topics in a social science course.  I'll be blunt--I don't think teenagers have enough life experience to truly analyze these topics.  And celebrating Black mathematicians--strictly because of the color of their skin--goes against everything I've ever been taught and everything I believe.  This framework is divisive.

That's enough for now.  I'll do other posts later.

Update, 5/24/21:  Our job is education, not indoctrination.  Read what professors Glenn Loury and John McWhorter say about this focus on race in education.

By accepting lower standards of achievement in students because of their race or gender, aren't the new standards perpetuating a lack of comprehension in the very populations they want to support? Won't this, in turn, mean fewer students capable of the STEM careers the Left so dearly loves? Ultimately, won't this perpetuate poverty and all the other social ills subscribed to less educational achievement? Could it be that despite all the sugared words and jargon, equity education is simply a hidden mechanism of Jim Crow attitudes?

Yes, and that's entirely ok IF in includes bringing down the top students. I'll address that in my review of Chapter 1.

What has become obvious to me is that the education establishment has been failing students for decades, and frameworks like this will allow them to hide the evidence of their failure. This noise and clutter of this framework helps conceal and excuse the fact that we are 37th in the world (amongst 37 developed countries) in mathematics.

ObieJuan - I concur. It's a smokescreen.