Sometimes, my collection of coins and paper money provides a tangible example of historical events.
click on pictures to enlarge 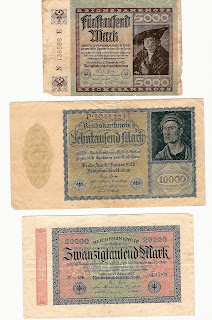 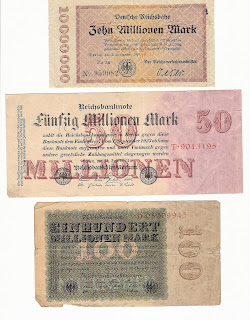 The notes above were printed and released so quickly that there isn't even printing on the reverse side. If that PBS story is correct, it would have taken 100 of those 100 million mark notes to equal a US cent.


The note below was issued on November 25, 1981, in Argentina. I can't find what the exchange rate with the US dollar was at that time, but any time you're dealing with that many zeroes on a note, there are economic problems: 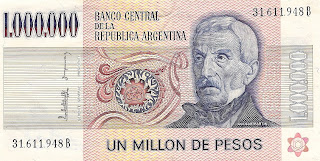 I believe post-WWII Hungary still holds the Guiness record for the highest inflation, but today's Zimbabwe seems to be making a run for the money: 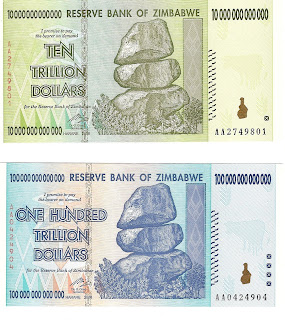 The "official" exchange rate is US$1=ZWD$359, but no one takes that seriously. Read here to learn more about the impact of Mugabe's economic policies, and how Zimbabwe is reacting to this runaway inflation.
Posted by Darren at 3:59 PM