Last week I had the privilege of traveling to Sacramento State University to interview two men about the university's Troops To College Program. When I first wrote about Troops To College, I had only the vaguest idea of what the program entailed. Having now met and spoken with the people responsible for running and growing the program, allow me to share with you what I have learned.

Jeff Weston is the Veterans Affairs Coordinator, running the program. Jody Policar is the university's Director of Development, and supports Jeff and the program by promoting and seeking funding for the program. They are both very proud of Sac State and its position as a leader among the CSU's in promoting the Troops To College program.

Sacramento State currently has close to 28,000 students, over 1,000 of whom are identified as veterans or children of qualified veterans. Clearly that latter number can and will grow, and Jeff is on hand to smooth the way for veterans who wish to attend college.

California has a three-tiered higher education system: our community colleges, the California State University system, and the University of California System. While the Troops to College program exists at all levels, the CSU system has taken the lead in promoting and developing the program. In fact, the CSU system is such an avid supporter of Troops to College that it produced not only its own CSU brochure (front page shown below) for the program, but also paid to produce the overall program brochure (second below).
click to enlarge 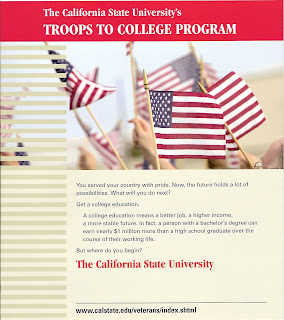 the front of CSU's Troops to College brochure 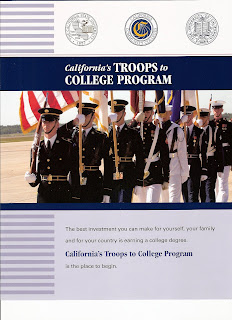 The front of California's overall Troops to College brochure

So what does this program do? It supports California's veterans (and dependents of qualified disabled veterans) in transitioning from the military to a university environment. It would be a long laundry list if I listed every little thing they do; a list of Sac State's Troops to College Committee members will give an idea of the type of support our California veterans receive. The Committee consists of a representative, or representatives, from the following on-campus organizations:
Most of the veterans who attend Sac State work part or full time, and this added support at the university level goes a long way to getting them started and helping them succeed. The average veteran at Sac State maintains a 3.18 GPA, certainly a credit to themselves and to the program that assists them.

Here is just one example of how the program supports veterans: school starts in early September, but students won't receive their first GI Bill check until October. Sadly, money is so tight for some that they wait until that check arrives to buy books. Sac State's T2C program has enough financial support to offer scholarships and/or grants of $500 a semester so that the student veterans can afford their books and supplies on time. The program also supports student-led groups for socializing, cameraderie, and an empathetic ear.

I stated previously that the CSU system leads California's higher education program in supporting the T2C (can I use that abbreviation?) program, and that Sac State (OK, and San Diego State) lead the CSU program. A T2C program exists at each of the 23 CSU campuses, and these campuses continue to work more closely together to create a cohesive, uniform program throughout the system. T2C coordinators have monthly conference calls and meet in person twice a year. Each campus has a veterans' web site, and most have already started student veteran groups.

Sacramento State has a reputation, not entirely unearned, of not being friendly towards veterans and the military in general. From what Jeff and Jody explained, though, this reputation belongs in the past. According to them, the university community from the President down to the faculty is exceedingly supportive of the program. As an example, Jeff has had no trouble at all in working with academic departments to seek additional support for individual students who might be close to going on academic probation. He was adamant that all departments and schools on campus support the program and the veterans themselves, and is proud to be part of a university that has such a welcoming climate towards the T2C program and its veterans.

While Jeff is running the program on a day-to-day basis, Jody works to keep it afloat financially. It was he who wrote the article in Sac State Magazine that alerted me to this program, and it is he who seeks donors to help fund it. So far SAFE Credit Union and the University Foundation are the two biggest donors, and I'm proud to say that I've made a humble donation to assist my fellow veterans. If you'd like to make a donation, instructions on how to do so can be found here.

Our veterans are fairly savvy people, gravitating to the money! The largest number of them are majoring in business, followed by criminal justice and nursing. The nursing program is "impacted"--there aren't near as many slots as there are applicants--and veterans automatically get a preference in acceptance into the nursing program. I was disappointed to learn that there are only 5 teachers-to-be in Sac State's T2C program.

So what successes can this program trumpet? First, it's a model for T2C programs at other CSU and even UC campuses. The formal program has been supplemented by a student-led student group/club. And the numbers tell their own story--there has been a 20% increase in T2C enrollment in just the last year. Coming soon is the "Summer Bridge Program", allowing veteran students a "head start in their transition to college. Here, they would begin to learn how to navigate the campus and various services available at the University, meet other veteran students, connect with a mentor, and register for classes", according to a T2C Program flier.

The last person drafted into the US military received that "honor" 35 years ago; there can only be a handful left on active duty. Accordingly, the vast majority of our young veterans today were volunteers, and many joined in the aftermath of the September 11th terrorist attacks. As a group they have served our country admirably, freed two other countries from the grip of tyranny, and demonstrated that they, too, have laid claim to the title "the greatest generation". Their sacrifices in the name of freedom and liberty have earned them this small token of gratitude from the State of California, this Troops to College Program.

I can attest that at Sacramento State, the T2C program--but most important, the veterans in that program--are in good hands.

And according to this article from the major Sacramento newspaper, veterans are in good hands at a nearby community college as well.
Posted by Darren at 9:15 PM