Despite Army's 8-4 record vs Missouri's 6-6 record, the two teams that competed in last night's Armed Forces Bowl were pretty evenly matched.  The final line was Army by 7, but I have a hard time believing that anyone really thought Army would beat that spread.

At the beginning of the game, ESPN.com's "Win Probability" had the teams pretty evenly matched: 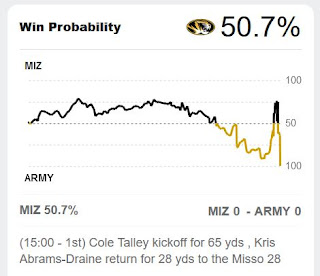 You'll notice that the percentage got higher and higher for Missouri for awhile, and that's because Army didn't show up for much of the first half, as noted by the scoring summary: 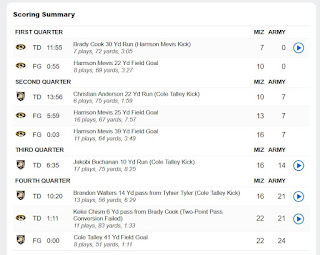 Going down 10-nothing, and ending the half down 16-7, isn't an auspicious start for Army.  In fact, if I remember correctly, Missouri scored on each of its 1st half possessions.  And let's be honest, Army isn't known for making tremendous adjustments at the half.

But they did something right.  Army kept possession for most of the 3rd quarter, eventually scoring when locomotive running back Jakobi Buchanan rumbled in for a 10-yard score, bowling over a defender and knocking him on his back.  Army's defense held on a 4th down and later caused a fumble.  You'll notice that during the late 3rd and for most of the 4th quarter, the "Win Probability" went Army's way.

Then Army's defense seemed to pack up and go home.  Missouri's freshman quarterback shredded the secondary, moving his team 10 yards at a time down the field to score a go-ahead touchdown with 1:11 remaining in the game.  The 2-pt conversion (to go up by 3) was over the intended receiver's head.

Army's 1st string quarterback Anderson went out in the 3rd quarter with an injury, and the 2nd string Tyler did an admirable job replacing him--even throwing a touchdown pass on 4th down, when passing is very much not his strong suit.  With 1:11 remaining, Army needed to move the length of the field and score.  In came 3rd string quarterback Laws.  Laws has a good arm.

Run, pass, pass attempt, pass attempt, run, pass attempt, pass, run, down the field Army went.  What Army team is this???  It wasn't always smooth, and clock management was sometimes questionable, but closer and closer they got to Missouri's end zone.  With seconds left, Army was a 41-yard FG away, and our kicker was 0-3 this season (again, if memory serves) on kicks over 40 yards.

With 3 seconds remaining in the game, the "predictor" had Army at 64.4%.  Then the kick went up and between the uprights as time ran out.  There was a flag on the field but it was against the defense, the kick was good, and Army won.

Not the worst way to end the season.