Iceland Pictures and Video--Geysir and Strokkur

Geysir is the geyser from which all geysers get their name.  It used to erupt 100m into the air, now it doesn't erupt at all.  Here's a picture from July 2015: 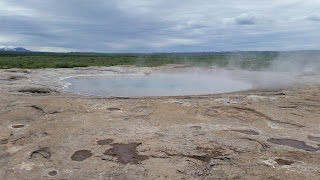 Nearby Strokkur, though, still erupts every 6 minutes or so.  It's more like an explosion than a fountain, and the water is spit about 100 feet into the air.  Here's a 2015 summer shot of Strokkur, with a crowd waiting to see the big event.  Notice all the greenery! 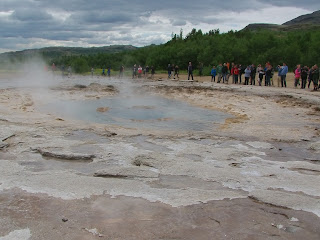 I didn't take pictures this trip but I got some good video, which I spliced together (editing out all the waiting) and put on Vimeo.  You'll see Strokkur erupt from a distance, then up close, and then in slow motion.  Notice all the whitery!
Posted by Darren at 9:54 AM