Earlier today I had the high privilege of visiting and being given a tour of the Oakland Military Institute, a charter school in the Oakland (California) School District. Summer school was in session so I did get to see some cadets, but I look forward to visiting again some time when the full student population is present--that's the only way to get a true feel for a school.

The school board and local teachers union were hostile to the creation of OMI from the very beginning; it was only the persistence of then-Mayor Jerry Brown (former CA governor, current attorney general), that allowed the school to get off the ground. For its first few years, OMI was located at the former Oakland Army Base. But that facility became needed, and OMI had to find a new home. There was a closed elementary school in a residential neighborhood... 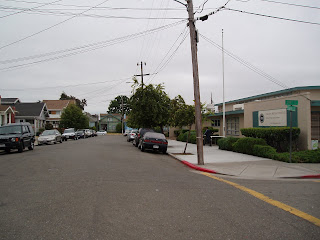 ...and that became the new and current Oakland Military Institute. The school has a 5-year lease on the building, so it's home for awhile. 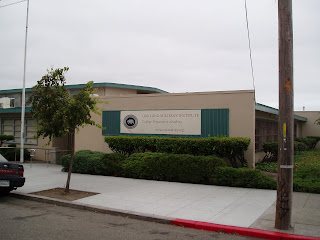 Of course, click on the pictures to enlarge them.

Look at the name on the sign in the picture above. Oakland Military Institute College Preparatory Academy. OMI's graduation requirements are the same "a-g requirements" for admission to our state's university system; clearly, these graduation requirements are stricter than those imposed by the state, and higher than any other school in the Oakland district. The reason is simple, and isn't hard to figure out if you drive around in the vicinity of the school--there aren't a lot of kids who are considering college in Oakland, and this school, like the AVID program at so many other schools, focuses kids on the goal of attending college.

OMI has approximately 600 students in 6th-12th grades. The students apply to get into this school and reflect the community from which they come; for example, in looking at pictures/names of students, I saw fewer than 5 non-Hispanic white boys in the hundreds of pictures I saw. The average student comes to OMI more than a year below grade level in some core subjects. In other words, these students are not much different from students in any other Oakland school.

Yet over 80% of OMI graduates go on to college--and I'm told that's just the 4-year colleges, that the percentage is higher when you add in junior colleges. They're doing something right at OMI, and I'll tell you what it is. 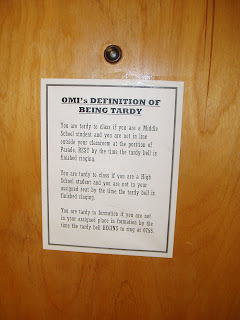 There is no ambiguity there, no room for interpretation. And that's good, that's what so many students need.

Now let me stop and say that this isn't Martinet High. The atmosphere is not one of Basic Training, there aren't a bunch of automatons running around. The kids here are just like the kids in any other Oakland school, and while you can take the kid out of Oakland (at least, out of the Oakland public schools), you can't take the Oakland out of the kid. These are mostly low-income, mostly minority kids from an inner city, with everything that implies. But instead of using that as an excuse to allow kids to fail, OMI helps them succeed.

While utilizing a military model, OMI is not a soldier factory, it's not a recruiting arm of the military, and they're not teaching warmongering there. I was very direct in my questions to the commandant on this topic, and his answers were equally clear. In addition to academic subjects OMI teaches leadership, it teaches respect, it teaches self-discipline, it teaches peaceful resolution to problems--values sorely needed given the environment so many of the students come from. Uniforms, formations, military-type discipline--these are just effective tools, very efficient tools, for instilling those values in students. They are merely a means to an end, and that end is college.

I said previously that the OMI campus is a converted elementary school in an inner city. There was no "field", so they bought one: 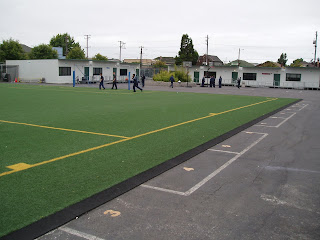 The students play soccer, conduct parades, and have PT on a (rather soft) field that used to be the blacktop. Athletic competition is always a great motivator, and records are posted: 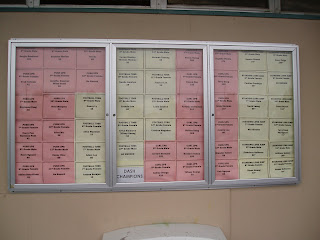 I don't quite understand the relationship, and perhaps a reader can clarify that for us all, but OMI is affiliated with the California Cadet Corps, a JROTC-like program of the California National Guard. Some of the military instructors are CCC officers and soldiers, and OMI cadets wear CCC uniforms. They wear the official CCC uniform (see some here) 3 days a week, and a black OMI PT uniform two days a week. Today during my visit there was summer school, and every cadet there had on the PT uniform. It's called a "uniform" for a reason.

There is no graffiti in or around the school. The walls were painted, the floors clear of debris. The building was obviously old but cared for. OMI reminds me of the Little Engine That Could.

I mentioned previously that it was Jerry Brown who really pushed for OMI, and I'm told that even today he comes by periodically to visit and see how the school and students are doing. I don't have very many positive things to say about Brown, but I give him an A+ for his continued commitment to this school and program.

The last time I looked up OMI's school accountability score a couple years ago, it wasn't that high. Let's do so now and see what we get.

Here are their scores. I'm impressed with the math scores; the lower classes' scores aren't so good, but the number of "advanced" and "proficient" students in Algebra 2 and Summative High School Math (the test taken in all courses above Algebra 2) show marked improvement over the lower courses. Here are the Oakland Unified School District scores as a whole. Pick your favorite subject area and compare the two.

This site gives the Academic Performance Index for OMI, and compares it with schools across the state with similar demographics. The information is from the school year that ended a year ago; 2007-08's information won't be posted until the end of August. If all of California's schools were ranked in order and divided into deciles, OMI's student performance would be in the 4th decile overall (better than over 30% of all schools in the state, worse than 60%). When compared only to schools with similar demographics, OMI would be in only the 2nd decile, so clearly there's room for improvement.

Overall, the Oakland District had a score of 651. OMI's score is 658. It's doing slightly better than the district as a whole, but it is helping more students get into colleges and universities.

To conclude, I'm impressed with OMI's program. I wish the school and its cadets continued success and continued improvement.
Posted by Darren at 5:12 PM

Interesting post...and like you, I'm not a fan of Jerry Brown (and wasn't when I lived in California either). However it sounds like this is one thing he did right.

can you go to my profile and send me an email? I don't have another way to contact you.

Before my grandfather passed away, he lived at the veteran's home in Yountville. It's quite a beautiful place.

For his 90th birthday, there was a huge party, probably close to 100 people, including many residents of the home. A group of students from OMI came up in uniform, and served food, cake and punch for the party.

Everyone was very impressed by the kids and all the help they provided. Leadership, self-discipline, and respect are definitely well-taught values at OMI, and those kids and that school have a lot to be proud of.

I've said it before, and I'll say it again. If we really want to reduce crime, get more kids educated and in productive jobs, give some kind of substantial motivation to parents to put their kids in military schools.

Greetings, I believe I posted on one of your previous blogs regarding OMI several years ago. I continue to laud OMI and Jerry Brown for his unique vision in creating this school. I'm glad that you actually visited OMI, and hope that you will return for one of its "Pass In Review" ceremonies. To remind you, 2 cadets from OMI's first graduating class became WestPoint cadets (and made it through their Plebe year!) and this most recent 2008 graduating class has one student going to Yale, and a few more to UC Berkeley, with most others into many other 4 year colleges. What a wonderful happening for Oakland students! FYI, OMI's cadets are associated with the California Cadet Corps due to the fact that the school is run in partnership with the California Army National Guard.

Sounds like a great program. Thanks so much for sharing this along with details.

I ATTENDED THIS SCHOOL FOR SIX YEARS...I BEGAN IN THE SEVENTH (SINCE BACK THEN IT WAS ONLY GRADES 7-9)AND I RECENTLY GRADUATED FROM OMI...IT REALLY IS A GREAT SCHOOL...I WAS TAUGHT LEADERSHIP, RESPONSIBILTY, TIME MANAGEMENT, AND THAT ACADEMICS SHOULD BE FIRST ON MY PRIORITY LIST...I WAS TAUGHT TO BE RESPONSIBLE AND BE HELPFUL. THE FACULTY AND STAFF ARE WONDERFUL PEOPLE...I ESTABLISHED SOME REALLY GREAT REALATIONSHIPS WITH ALL MY TEACHERS AND SERGEANTS. WHENEVER I NEEDED HELP WITH EITHER PERSONCAL OR ACADEMIC PROBLEMS...ALL I HAD TO DO WAS TURN THE CORNER AND THERE WAS ALWAYS SOMEONE THERE TO HELP AND LISTEN TO ME.I REALLY ENCOURAGE PARENTS TO PUT THEIR CHILDREN IN OMI. ITS A WONDERFUL EXPERIENCE.