Both Tom Tancredo and Ron Paul made appearances at the Concerned Educators Against Forced Unionism reception in the Cannon House Office Building. Tancredo even addressed us, if only briefly.

I was quite surprised to see Ron Paul in a suit and tennis shoes. I've since come to learn that that's his signature fashion statement. Click on the pictures to enlarge them--you can definitely see the tennis shoes. 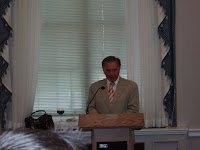 Here's the closeup of his shoes: 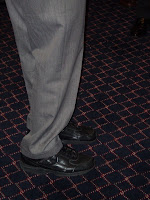 What would the Manolo say?

Update, 7/1/07: The Manolo tells us what he would say, and he apparently doesn't approve.
Posted by Darren at 3:04 PM

Dude, it is seriously scary that you are familiar with The Manolo. Having said that, it also adds an interesting new dimension to your charm.

When I tell you the answer you'll wonder why you hadn't thought of it before. RP had a past knee injury. I too had a serious knee injury in the past and can attest to the fact that comfortable shoes are a must when I'm going to be on my feet.

I am not planning on voting for him.

I was rather subtle and discreet.

That actually makes me think considerably more favorably of Ron Paul. I like a guy who puts being comfortable over being fashionably correct.